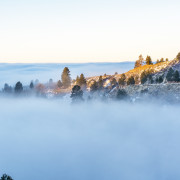 In fact, during the most recent reporting period (2011-2013), short-term fine particulate pollution levels in Ada County substantially exceeded EPA’s health-based standards and were the seventh highest in the nation.

The American Lung Association released its 2015 State of the Air report, and the Boise area was ranked the 23rd most polluted city in the nation for short-term particulate pollution.

This report confirms our findings that Boise has a particulate pollution problem, which the State of Idaho is failing to address. In the Report, Ada County earned an F for short-term particle pollution and a C for ozone pollution.

The Clean Air Act petition we filed with ICL in February notifies EPA and the State that they have a duty to clean up our air. Granting our petition is the first toward getting Boise off the list of Most Polluted Cities.

The Treasure Valley is home to more than 600,000 people and includes Idaho’s three most populous cities: Boise, Nampa, and Meridian. High levels of fine particulate matter pollution like those now experienced in the Treasure Valley are associated with visible haze, lung and heart disease, and early death. Due to projected population growth, this problem is likely to get worse.

Our petition urges EPA to designate the Treasure Valley as a “non-attainment area” under the Clean Air Act. Designating the Valley as a non-attainment area will trigger a process under the Clean Air Act by which the State of Idaho and EPA would work together to develop a plan to bring the Valley’s air quality back to healthy levels within five years.

EPA is currently reviewing our petition. We also asked Idaho Governor Butch Otter to use his authority as Governor to do the same, but we have yet to hear back from the State. Until the Treasure Valley is designated as a non-attainment area, Valley residents will continue to view and breath unacceptably high levels of fine particulate pollution.