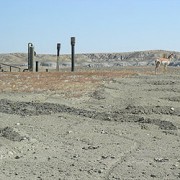 Advocates for the West recently helped broker an innovative settlement between WWP and El Paso Pipeline Corp. to establish a $15 million Sagebrush Habitat Conservation Fund. The Fund will work to retire grazing permits on a willing seller basis to mitigate for impacts of the 650-mile Ruby natural gas pipeline on sage-grouse and other sagebrush species.

The Ruby pipeline is a project of El Paso Pipeline Corp., the country’s largest pipeline company, which will cover 650 miles from southwestern Wyoming to southern Oregon. The Ruby pipeline will carry 1.5 billion cubic feet of natural gas per day, providing a coal substitute for utilities on the West Coast. But the Ruby pipeline route cuts through key sagebrush habitats, and will contribute to fragmentation of sage-grouse and pygmy rabbits – both declining species that warrant protection under the Endangered Species Act. Rather than litigate against the pipeline — which might have caused delay, but was unlikely to succeed in stopping this FERC-approved pipeline – Advocates for the West helped broker a innovative settlement agreement between our client Western Watersheds Project and Ruby, which will pay $15 million over 10 years to establish a new Sagebrush Habitat Conservation Fund. This Fund will seek to retire grazing permits on a willing seller basis to promote ecological restoration of native sagebrush habitats, to help mitigate for the pipeline’s impacts.