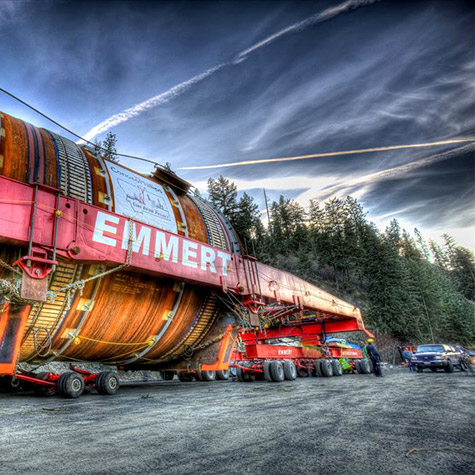 The industrial conglomerate makes a machine the size of a Space Shuttle orbiter that can extract crude oil from the depths of the Canadian oil sands. But first it has to get it there, and the only way is a road a federal judge says GE can’t use.

Last week, GE lost an attempt to overrule a federal injunction preventing it from using a stretch of scenic Idaho highway to haul the giant piece of equipment, called a water evaporator. It has appealed the injunction. For now, though, the evaporator is stuck near the Port of Wilma in Clarkston, Wash., without a way to get to its destination hundreds of miles away in Alberta, Canada.

For GE, which prides itself on solving the world’s biggest problems, the ruling has become a headache that could cost the company as much as $75 million in sales. And it is self inflicted.

Two years ago, Imperial Oil, the Canadian unit of Exxon Mobil Corp., faced similar challenges when trying to haul 200 pieces of equipment along the same roadway. But legal challenges to its preferred route led Imperial to disassemble the equipment and move it along interstate highways instead.

The cost of disassembling them and reassembling them was significant. Final construction of its oil sands site exceeded budget by C$2 billion to C$12.9 billion.

“It would be fair to say that the cost associated with module delays was the single largest factor,” said Imperial Oil spokesman Pius Rolheiser. All of Imperial Oil’s equipment is now made in Edmonton in part to avoid the transportation headaches.

Even without the legal obstacles, transporting the evaporators would be a feat. Each weighs 322 tons, is as wide as a two-lane highway and, laying on its side, as tall as a two-story house. Moving it takes two trucks–one pulling and another pushing–with 20 axles along multiple trailers stretching the load out to 250 feet. Interstate highways aren’t an option, because the load can’t get under the overpasses.

Opponents, including the Nez Perce Tribe and conservation group Idaho Rivers United, say they are concerned the giant convoys will change the character of the national park and infringe on tribal values.

The holdup is an unneeded hassle for GE as it leans on its oil business for growth as core areas like power generation remain stalled.

The company has been building up its oil field services businesses for the past decade, and GE Chief Executive Jeff Immelt has invested to expand its offerings in unconventional fields like shale gas and the oil sands.

GE’s Resource Conservation Company International has delivered about 20 evaporators to projects in the oil sands since 2002 but used different travel routes. This time it contracted a producer in British Columbia to make the evaporator after getting the order from an undisclosed client in early 2012.

It mapped out a transport route that follows 100 miles of U.S. Highway 12, which cuts through Idaho’s National Forest along switchbacks up to the Bitterroot Range’s Lolo Pass. The loads would only travel at night to reduce the disruption because they block the entire road. The convoy planned to pull over every 15 minutes to let traffic pass. An ambulance would travel with the convoy in case of an emergency along the highway. And the lights were to be turned off when passing campgrounds.

GE did a trial run a year ago sending an evaporator over the same pass without incident and secured permits from state highway officials. That made the company think there wouldn’t be problems.

The fact that GE had the full support from Idaho Transportation Department “gave us a very high degree of confidence,” said William Heins, chief operating officer of RCCI.

But despite 15 months of detailed planning, GE failed to get approvals from the Nez Perce Tribe, which lives on the land around the scenic highway, or from the Forest Service, which has authority over the 100 mile long stretch of highway.

The Nez Perce Tribe and Idaho Rivers United objected and in August went to court winning an injunction to stop the megaload shipments pending a review of how the traffic would impact the environment.

GE tried to get the court to reconsider the injunction noting that the delay would be burdensome. Mr. Heins told the court the injunction could cost the company $3.6 million in damages from liquidated contracts, $5 million in increased transportation and equipment costs, and up to $75 million in potential lost revenue over the next year. The judge found GE had made an informed gamble given that the legal troubles that had preceded it and declined to stay the injunction.

How long the review will take is unclear. For now, GE is in a holding pattern, according to Mr. Heins, thinking about alternatives like different routes or modifying the equipment.

The delay is a headache as well for GE’s unnamed customer. Costs are already an issue for producers in the oil sands. Canadian crude oil prices are cheaper than those from the U.S. because of constraints in getting the oil to refineries. Some producers have had to cut spending. Suncor Energy Inc., the biggest oil sands producer, and France’s Total SA this year scrapped a C$11.6 billion refinery project.

Transport limits are a known problem. Even the highway from Edmonton to the oil sands enforces restrictions. During the spring thaw, authorities frequently put in weight limits, and large loads can’t travel on holiday weekends, said Ross Krill, head of facilities for Cenovus Energy Inc., a Canadian oil sands producer. Cenovus ships its equipment in pieces that will fit on the back of a regular truck, what Mr. Krill, calls the standard “shipping envelope.”

The Calgary-based company had struggled with third party manufacturers and eventually decided to manufacture all its own equipment in Alberta to limit the risks.