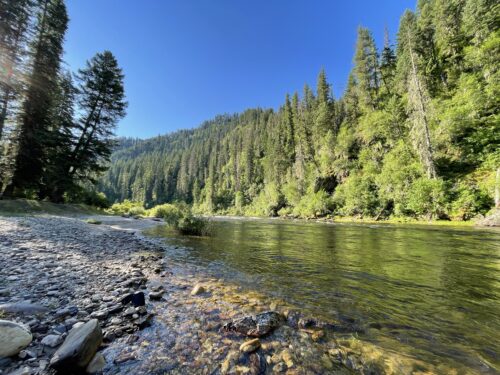 Advocates for the West won a significant victory in our case for Friends of the Clearwater when a federal District Court issued a ruling halting the “End of the World” and “Hungry Ridge” logging projects on the Salmon-Clearwater Divide in Idaho. In its ruling, the Court faulted the U.S. Forest Service for failing to protect old growth forest.

The Salmon-Clearwater Divide is the mountainous, forested ridge rising between the Salmon River and the South Fork Clearwater River between Grangeville, Idaho, and the Gospel Hump Wilderness.

“This is a big win for fisher, marten, goshawk, and other wildlife that depend on old growth forest,” said Bryan Hurlbutt, Staff Attorney at Advocates for the West. “Stopping these misguided projects is also a big win for other at-risk species that would have been harmed by a decade of intensive logging across all types of forest, including salmon, steelhead, lynx, and grizzly bear, which have been documented on the Salmon-Clearwater Divide in recent years.”

“This is another example of the Forest Service’s skewed priorities placing industrial timber production above widely shared public values associated with old-growth ecosystems, such as biological diversity, wildlife habitat, recreation, aesthetics, soil productivity, water quality, and fisheries habitat,” stated Jeff Juel of Friends of the Clearwater, author of a 2021 report on the management of old growth in the northern Rocky Mountains of the U.S. “Here, the Forest Service used flawed definitions to overestimate the amount of old growth that would remain after clearcutting and to claim old growth protections would be met.”

“Not only would the Forest Service clearcut our mature and old-growth forests, it would also clearcut our future by reducing the forest’s ability to sequester carbon,” stated Paul Busch of Friends of the Clearwater. “President Biden’s Executive Order on forests this April recognized the diverse benefits these ecosystems provide when they are allowed to function as they have for time immemorial.”

The Forest Service approved End of the World and Hungry Ridge in early 2021. Represented by Advocates for the West, Friends of Clearwater, a conservation group dedicated to defending wildlands and wildlife in the Clearwater Basin, filed suit in federal court in April 2021.

End of the World and Hungry Ridge are each significantly larger than other logging projects approved in Idaho in decades. Together, the projects would have resulted in logging over 40 square miles on the Salmon-Clearwater Divide to generate more than 317 million board feet of timber over the next 10 years. Of that, over 11 square miles would have been logged by clearcutting and similar techniques, riddling this part of the Nez Perce National Forest with numerous large, unnatural open areas.

In the June 24 decision, the U.S. District Court for the District of Idaho agreed that the Forest Service failed to ensure required minimum amounts of old growth will be protected from logging. The Court enjoined End of the World and Hungry Ridge and ordered the Forest Service to accurately identify old growth stands and to comply with all old growth protections.

Naturally resilient and biologically diverse, old growth forests are crucial to wildlife in the Northern Rockies. After clearcutting, it takes at least 150 years for old growth wildlife habitat to reestablish, making them effectively nonrenewable resources from a human timeframe.

Science also recognizes how forests of mature and old trees continue to store disproportionally massive amounts of carbon, helping to moderate the effects of climate change. One study in Eastern Oregon found that the largest 3% of trees account for 42% of carbon storage in forests.