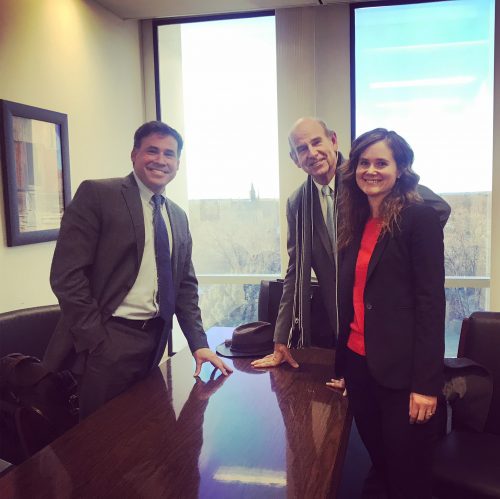 On Monday, December 16, Advocates for the West and the Nez Perce Tribe (Tribe) won a decisive victory against Canadian mining company Midas Gold Corp. We argued in Idaho federal court against Midas Gold’s motion to dismiss or stay our Clean Water Act lawsuit, which we brought with co-counsel from the Nez Perce Tribe Office of Legal Counsel. US District Court Judge Winmill ruled from the bench denying Midas Gold’s motion to dismiss, and will soon issue a ruling on whether to stay the case.

We teamed up with the Tribe to sue Midas Gold for illegally discharging arsenic, cyanide, mercury, and other harmful pollutants at its proposed Stibnite Gold mine site.The Clean Water Act prohibits the discharge of pollutants into surface waters such as lakes, rivers, streams, and wetlands without a permit.

“Midas Gold Corp.’s leadership has met with the Tribe on numerous occasions to advocate for its only business project — the proposed Stibnite gold mine. I am therefore troubled that Midas Gold Corp. tried to evade ownership responsibility in court,” stated Shannon Wheeler, Chairman of the Nez Perce Tribal Executive Committee. “The Tribe remains committed to serving as the voice of these resources and to ensuring a full cleanup happens without further delay.”

Our suit asks the court to hold Midas Gold, as the owner and operator of the Stibnite mine site, responsible for its illegal pollution discharges into the East Fork South Fork Salmon River and its tributaries. The mine site is located within the Nez Perce Tribe’s aboriginal territory and is subject to its fishing, hunting, gathering, and pasturing rights, which the Tribe reserved in its 1855 Treaty with the United States.

“Advocates for the West is excited by this win and honored to be assisting the Nez Perce Tribe in protecting its rights and resources at the Stibnite mine site.” said Staff Attorney Amanda Rogerson, who is working with the Tribe on this important case.

We expect to receive a decision from the Court soon regarding Midas Gold’s motion to stay our case, so stay tuned!