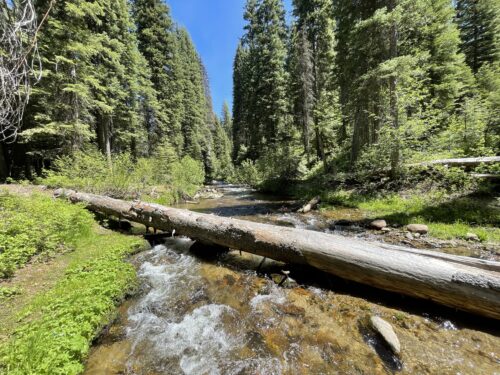 This week, Advocates for the West reached a settlement requiring the Forest Service to develop an additional alternative with reduced road construction and commercial logging for the Sage Hen Restoration Project on Idaho’s Boise National Forest.

The original project also included thinning and prescribed fire, along with some watershed restoration activities, on 68,000 acres of public lands around the popular Sage Hen Reservoir in Idaho’s West Mountains. In December 2021, Advocates for the West filed the lawsuit on behalf of the Idaho Conservation League (ICL) after the Forest Service rushed the project to approval, cutting out the public and placing the area’s plants, fish, and wildlife at risk.

“Sage Hen area bull trout are listed under the Endangered Species Act and live further south and at lower elevation than most other bull trout populations, putting them at serious risk due to climate change,” said Bryan Hurlbutt, Staff Attorney at Advocates for the West. “Instead of putting these threatened fish at further risk, a new and improved Sage Hen Project could help restore and sustain the cool, clear, free-flowing streams these fish need to survive.”

“This is another chance for the public to get involved with this revised project, which could include additional forest and watershed restoration opportunities and expanded recreation opportunities,” said John Robison with ICL. “If done correctly, the project could serve as a model for the next generation of forest and watershed restoration projects in Idaho and beyond.”

“I am looking forward to getting the project back on track so we can better protect and restore the habitat for fish and wildlife around the Sage Hen area,” said David Dudley, a local private property owner, who has lived in the area for decades and has been tracking the project closely.

The Sage Hen Project is part of troubling trend of the Forest Service using “conditions-based management” to approve larger projects with minimal up-front planning and environmental review. Under this approach, the agency authorizes a maximum amount of activity in the project area (such as miles of new roads and acres of commercial logging) but decides later — outside of the required, public environmental review process — specifically when, where, and how these activities will take place. As a result, the likely environmental impacts are largely unknown.

In addition to the Forest Service, the lawsuit also named the U.S. Fish and Wildlife Service as a defendant for failing to protect bull trout, a species listed as “threatened” under the Endangered Species Act due to significant population declines and ongoing threats. The isolated bull trout populations in the Sage Hen area are among the most susceptible of all bull trout in the United States to harm and habitat loss from climate change.

Read More on this Case