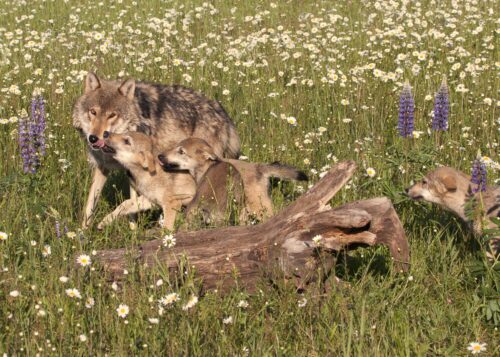 Yesterday, a U.S. District Court judge approved a settlement agreement filed by Advocates for the West and Western Watersheds Project that will help protect Idaho’s native carnivores through a number of measures.

The agreement between conservation groups and the U.S. Department of Agriculture’s Wildlife Services, the U.S. Forest Service, and the Bureau of Land Management guarantees interim protections for these species pending the completion of new environmental reviews of Wildlife Service’s actions.

The settlement gives Wildlife Services until the end of 2024 to complete a new environmental review of its activities on federal lands, and mandates that the agency will consider an alternative restricting predator killing on certain public lands, blocking “preventative” killing of wolves and coyotes, and placing a long-term moratorium on the use M-44 “cyanide bombs” of the type that poisoned 14-year-old Canyon Mansfield and his dog near Pocatello, killing the family dog, in 2017.

Until environmental reviews of the agencies’ actions are complete, the agreement also halts the use of “denning” (gassing or immolating wolf pups in their dens), limits the agency’s methods of trapping, and requires reporting if Wildlife Services traps go un-checked for more than 72 hours—an important measure to prevent animal cruelty.

“Our settlement also means that native predators that live in Wilderness or Wilderness Study Areas in Idaho will not be killed by Wildlife Services except to protect human health and safety,” said Laurie Rule, Senior Attorney at Advocates for the West, which along with counsel from Western Watersheds Project represented WildEarth Guardians and Predator Defense in the case. “These areas are intended to remain in their natural state, including allowing predators to fulfill their natural role in the ecosystem.”

“We’re pleased to have added restrictions to the wildlife-killing activities that USDA Wildlife Services is pursuing across Idaho,” said Erik Molvar, Executive Director of Western Watersheds Project. “This new agreement blocks wildlife killing on protected public lands across Idaho, and blocks the use of certain lethal methods employed against native carnivores throughout the state.”

“This settlement forces the federal agencies to come up to speed on the new science around management of native carnivores and to stop using inhumane and antiquated methods like poison or body-gripping traps,” said Lindsay Larris, Wildlife Program Director of WildEarth Guardians. “This settlement ensures that Wildlife Services won’t use gas cartridges or burn wolves alive in their dens—a practice they were unfortunately still able to lawfully employ, until today.”

The settlement was reached pursuant to a lawsuit filed in Idaho District Court in 2020, asserting that Wildlife Services had violated federal law with regard to its predator management programs by relying on outdated and inadequate assessments of its policies and methods.

This week’s settlement follows a March 2020 settlement in an earlier lawsuit that substantially restricted the places where Wildlife Services could kill wolves in Idaho. Predator protections under both agreements will be in place until Wildlife Services completes a new environmental impact statement in 2024.