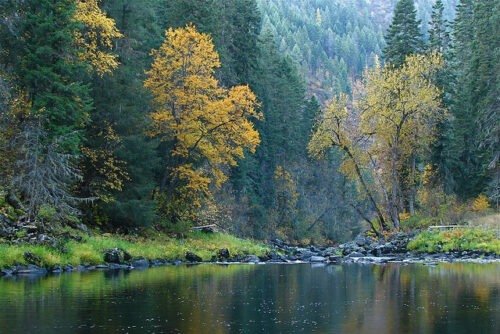 This week, federal Magistrate Judge Raymond Patricco levied a $150,000 fine against California suction dredge miner Shannon Poe, who polluted the South Fork of the Clearwater River and refused to secure a permit as required under the Clean Water Act (CWA).

The fine represents one of the largest CWA penalties against an individual in Idaho. The ruling also prohibits Poe from mining on the South Fork in the future unless he secures and complies with a CWA permit.

Advocates for the West represented the Idaho Conservation League in the lawsuit, filed against Poe in August 2018 for his repeated flouting of the law and illegal suction dredge mining. For years, Poe and his organization, the American Mining Rights Association, have encouraged miners to ignore federal rules on the South Fork of the Clearwater River and across Idaho.

“The South Fork Clearwater River is an Idaho gem, and shouldn’t be mined,” said Bryan Hurlbutt, Staff Attorney at Advocates for the West. “Any mining there must be held to the highest standards.”

“Judge Patricco’s decision should be a warning to anyone who flouts the rules designed to protect clean water,” said Jonathan Oppenheimer, External Relations Director at the Idaho Conservation League. “Whether you’re a boater, angler, logger or miner, you have to follow the rules; it’s our responsibility as citizens. This ruling, which represents one of the largest Clean Water Act fines ever levied in Idaho against an individual, should send a clear message to miners, or anyone, who refuses to follow the rules.”

Suction dredge mining is a method of mining gold from riverbeds in which an underwater hose is used to suck up riverbed materials and then sort them for gold. After sorting, riverbed materials are discarded from the floating dredge into the river, creating a muddy plume that flows downstream, and leaves behind dredge holes and waste rock piles in the riverbed.

Dredge mining can wreak havoc on fish, wildlife habitat, riverbanks, waterways and riverbeds. A high-powered vacuum sucks up gravel and sediment at the bottom of a stream, dumps the material into a sluice box to capture gold, if any, and then spews the gravel and sediment back into the water. Video footage is available from ”Dirty Gold,” presented by Friends of the Clearwater.

Suction dredge miners are required to obtain Clean Water Act permits, known as a National Pollution Discharge Elimination System (NPDES) permit, to limit the harm they cause Idaho’s rivers. Poe, however, refused to obtain the permit from the Environmental Protection Agency when he mined in the South Fork of the Clearwater in 2014, 2015 and 2018.

This week’s decision follows a ruling in the same case issued in June 2021 that Poe violated the Clean Water Act when he engaged in unpermitted suction dredge mining on 42 separate days. Other similar cases against dredge miners in Idaho resulted in penalties of $3,600, $6,600, and $24,000. The penalty ordered by Judge Patricco was elevated due to Poe’s repeated violations, disregard for warnings, and encouraging others to violate the law.