By Board President Linwood Laughy

In 1966 I lived with my parents beside the Middlefork of the Clearwater River in north central Idaho. Our home stood 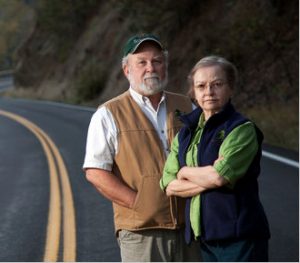 across the river from Highway 12, with principal access by rowboat and canoe. One day a neighbor invited my father to come meet two friends, an elderly Nez Perce woman who spoke only her Native language and her daughter, who served as translator.

Dad canoed the river and walked a short distance to our neighbors’ home, where he was introduced. The older woman told dad that as a girl and young woman she often visited the cedar-edged meadow where our house now stood. She explained that the meadow was her family’s campsite for a typical three-day fishing trip.

My father asked, “How many fish would you catch in those three days?” After consulting her mother, the daughter replied, “Twenty-five horses.”

Puzzled and thinking his question had been misunderstood, my father explained that he was asking “How many fish?”

Then my father understood—the elder woman was measuring “how many fish” by how many horses were needed to carry those fish. Twenty-five horses of plentitude.

The 2017 news reports describe Idaho’s wild Chinook salmon and steelhead runs as in “a state of collapse.” This year’s projected run of the once-famous wild Clearwater River B-run steelhead is just 750 fish. Idaho’s sockeye salmon are on life support. After twenty years and billions of taxpayer and ratepayer dollars spent trying to ameliorate the effects of dams on wild fish migrations, those fish remain on the Threatened and Endangered Species list. “Collapse,” writes author and passionate salmon advocate David James Duncan, “is simply extinction in slow motion.”

Advocates for the West has been fighting to protect Idaho’s salmon and steelhead habitat for fifteen years—successfully opposing destruction of stream banks from over-grazing, irresponsible mining, sedimentation of spawning grounds from poor logging practices, and more. We are now extending this work to the lower Snake and Columbia Rivers—Advocates for the West was the first firm to file suit against Environmental Protection Agency Administrator Scott Pruitt for EPA’s failure to regulate water temperatures that sicken and kill thousands, even hundreds-of-thousands, of migrating fish.

Advocates for the West’s work is critically important to bringing one of Idaho’s greatest treasures back from the brink of extinction. While we will never see populations return to the days of twenty-five horses, we can fight for those fish that remain and hope that future generations may see Idaho rivers turn silver and red with salmon and steelhead once again.