The Fight for Bears Ears

Featured image of petroglyphs at Bears Ears courtesy of Patagonia. Watch their stunning footage of Bears Ears National Monument and learn how you can help protect this special place today!

A flash flood from a distant storm in Slickhorn Canyon on Cedar Mesa almost washed my girlfriend and me down the canyon a few years ago. I learned something that night that I’ve never forgotten: don’t assume safety in an inherently unsafe place.

Beware! The Bears Ears National Monument is politically unsafe. Even with the recent national monument status, the vast Cedar Mesa of Southern Utah where I hiked is still not safe from development. President Trump stated all of President Obama’s Executive Orders will be challenged. And judging by Trump’s comments, the Bears Ears Monument is at ground-zero.

The new Bears Ears National Monument is big land with big cultural, spiritual, and wildlife values. Anyone who has hiked in Grand Gulch, Arch, McCloyd, Mule, Fish and Owl, Road, Lime canyons or dozens of others will recognize how just how big it is. Everyone should have the chance to go there and behold this stunning beauty. 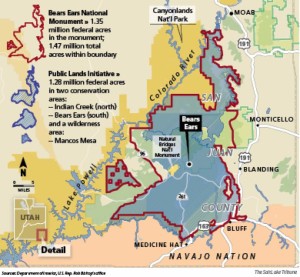 President Obama signed the Bears Ears Proclamation declaring 1.35 million acres on Cedar Mesa as a national monument on Dec. 28, 2016. This monument lies south of Moab and west of Blanding. It touches Canyonlands National Park on the north and Glen Canyon National Recreation Area on the south and surrounds Dark Canyon Wilderness and Natural Bridges National Monuments.

The Bears Ears National Monument gives five Native American tribes significant powers to manage their land. It withdraws the land from mineral and geothermal development. It defines a land trade with the state of Utah and requires developing a plan to guide management of the region. All of these prescriptions are needed to protect ancient cliff dwellings, rock art, artifacts, sacred kivas, endangered species and other species like bighorn sheep and black bears. It should prevent overuse by recreational users.

Sen. Hatch, R-Utah, said the following about the national monument: “With this astonishing and egregious abuse of executive power, President Obama has shown that far-left special interest groups matter more to him than the people who have lived on and cared for Utah’s lands for generations. For Utahns in general, and for those in San Juan County in particular, this is an affront of epic proportions and an attack on an entire way of life.”

Rep. Lee, R-Utah, tweeted:“I will work tirelessly with Congress and the incoming Trump Administration to honor the will of Utahns and undo this designation.”

Bears Ears is now in serious jeopardy — again. We must remain committed to take on political and legal action. Rampant development can only be avoided in the Bears Ears National Monument with careful planning and an informed, outraged, and active citizenry.

Mike Medberry is a writer and long-time environmentalist who currently lives in Boise, Idaho.