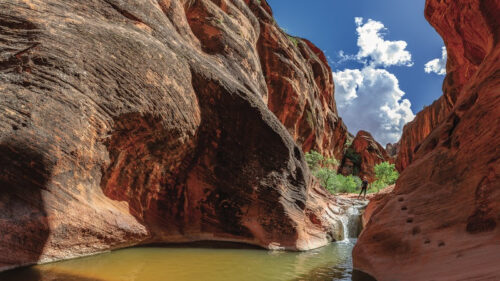 Advocates for the West recently filed suit against the U.S. Department of the Interior and Bureau of Land Management (BLM) to halt a plan approved under the Trump Administration that would punch a four-lane highway through the Red Cliffs National Conservation Area in southern Utah. The planned highway would pave over a protected, sensitive, scenic desert paradise in southwest Utah, violating bedrock environmental and cultural resource protection laws.

“It is inconceivable that Secretary Haaland would support and defend the Trump Administration’s decision to punch a highway through the Red Cliffs NCA and Mojave desert tortoise critical habitat,” said Senior Attorney Todd Tucci. “If Secretary Haaland follows President Trump’s lead, she will undermine not just the Red Cliffs NCA but the integrity of each and every National Conservation Area nationwide. A National Conservation Area is no place for a highway.”

BLM’s plan fails to adequately address the impact of recent wildfires, the illegal use of the Land and Water Conservation Fund, and the issues with the alternatives’ cost estimates in selecting this route. Subsequently, our coalition of client-partners issued a 114-page protest of the Final Environmental Impact Statement for the highway.

“A wildlife extinction crisis exists in Washington County, Utah and tens of millions of taxpayer dollars have been invested in the National Conservation Area for the conservation of the threatened Mojave desert tortoise and preserving biodiversity,” said Bill Mader, first Administrator of the Red Cliffs Desert Reserve and former smokejumper. “Recent wildfires devastated nearly 25% of desert tortoise habitat within the Conservation Area. The selected route for a freeway through the National Conservation Area will turn it into a wildfire tinderbox. It makes no sense to have spent millions of dollars to save tortoises and the biodiversity they depend upon, to then turn around and build a freeway that destroys the population.”

BLM analyzed transportation alternatives outside of Red Cliffs NCA and found that those alternatives more effectively relieve traffic congestion and protect wildlife, scenic beauty, and local access to trails. One alternative, the Red Hills Parkway Expressway, would allow cars to travel east-west across the northern St. George metropolitan area, connecting Red Hills Parkway directly to I-15, enabling it to flow around congestion points while also improving flow through those congestion points. Another improves traffic flow through congestion points while also improving business access and the pedestrian experience in downtown St. George.

“The decision by the previous administration to approve the Northern Corridor Highway is a clear violation of the National Conservation Area’s purpose and ignores more effective and environmentally-sound transportation alternatives,” said Tom Butine, Board President of Conserve Southwest Utah, our lead plaintiff in the lawsuit. “If a highway is allowed through this protected land, it means nothing can be protected.”