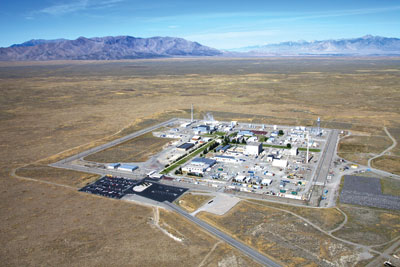 BOISE, IDAHO – On March 5, 2015, former Idaho governors Cecil D. Andrus and Philip E. Batt called upon the State of Idaho and the federal Department of Energy to fully disclose their plans for shipments of commercial spent nuclear fuel to the Idaho National Laboratory (INL).Representing the Governors, Advocates for the West Director of Litigation, Laird Lucas, sent a letter today to Energy Secretary Ernest Moniz expressing deep concern about planned commercial spent nuclear fuel shipments to INL – due in particular to the threat of high-level and other nuclear waste potential impacts to the Snake River Plain Aquifer. The letter notifies DOE that it is violating a key federal law – the National Environmental Policy Act (NEPA) – by not publicly disclosing these plans or analyzing how the spent fuel will be treated and stored at INL. DOE plans to spend $200 million over ten years for commercial spent nuclear fuel shipments to Idaho for testing purposes, but has not disclosed how the spent fuel will be treated. Under NEPA the agency must analyze alternatives, environmental impacts and provide that information to the public. “We hope to avoid bringing federal litigation over DOE’s plans to ship commercial spent nuclear fuel to Idaho,” said the former governors,” but we are prepared to take that step if necessary. It is vital that the citizens of Idaho be fully informed before the federal government again tries to turn Idaho into a nuclear waste dumping ground.” The 1995 “Batt Settlement Agreement” resolved federal court lawsuits begun under Governor Andrus to prevent DOE from turning INL into the nation’s nuclear waste dumping ground. A key provision prohibits shipments of spent nuclear fuel from commercial utilities. However, current Idaho Governor “Butch” Otter and Attorney General Lawrence Wasden indicated in January that they would “waive” this ban to allow DOE to begin commercial spent nuclear fuel shipments to INL beginning in June 2015.Former governors Andrus and Batt also sent a second letter to Governor Otter and Attorney General Lawrence Wasden today, asking them to join with the former governors in pressuring the DOE to comply with federal law. “The precedent set by allowing these commercial spent nuclear fuel shipments demands that DOE’s plans be fully disclosed to the public and analyzed, and Idaho’s leadership should make sure that happens,” they stated.