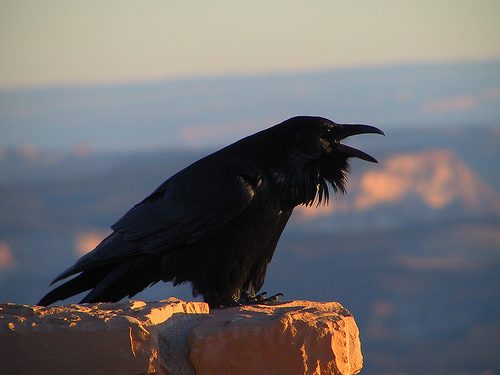 We are elated to announce that the agencies have backed down, and no ravens will be poisoned or crushed this spring.

Fish and Game representative Jeff Gould claims the agencies will execute this project next spring, once a supplemental environmental assessment has been completed, but Advocates for the West and our clients are here to make sure their scientifically unsound plan does not move forward.

Many thanks to everyone who helped us fight this ill-conceived plan – and win!

Idaho’s proposed raven killing plan is receiving a lot of negative attention in the local and national media. Check out the latest stories:

Also, on May 12th Todd sent a letter to the US Fish and Wildlife Service demanding they put this insane plan to rest, which you can read here:

Advocates for the West, along with a host of other concerned conservation groups, sent a letter to Secretary of the US Department of Agriculture, Tom Vilsack, asking that the agency step in and stop Wildlife Services and the Idaho Department of Fish and Game from shooting, poisoning and euthanizing over 4,000 Common ravens in Idaho. Read the letter here:

The USDA-Wildlife Services and the Idaho Department of Fish and Game (IDFG) recently announced a joint effort to spend over  $100,000 to kill approximately 4,000 ravens – including poisoning, shooting, or euthanizing adult ravens, hatchlings and nestlings. The agencies claim these efforts are to protect sage-grouse eggs and hatchlings, but in an interview with MagicValley.com reporter Brian Smith, a field biologist with IDFG admitted:

“We can’t directly say that (sage grouse population decline) is from ravens, because we don’t have that information.  There’s anecdotal information.”

That’s right – IDFG and Wildlife Service’s plan to kill 4,000 ravens based on nothing more than “anecdotal information.” Worse yet, this same biologist acknowledges that “[w]e’re pretty sure that once you remove a territorial pair of ravens, somebody else is going to move right in.”

So, Wildlife Service’s and IDFG have developed a raven-killing scheme based on “anecdotal information,” and which is destined to fail because more ravens will simply “move right in”?  Why?  Because politics – i.e. the Idaho Legislature – has required it!

Clait Braun, one of the world’s leading experts on Greater sage grouse, is working with Advocates for the West’s Todd Tucci to stop this slaughter.  Shortly after this scheme was announced, Dr. Braun submitted comments to Wildlife Services, citing numerous reasons why killing ravens would do nothing to help the sage-grouse population. Early on in his 39-page submission, Dr. Braun states:

“The proposed common raven control action is not well designed nor scientifically supported, especially because the project lacks scientific controls and no scientific way to measure success of the project. Due to failures in the design of this project, no tenable scientific data will be gathered. Indeed, it appears that this project represents nothing more than Wildlife Service’s efforts to indiscriminately kill over 4,000 ravens, and to shift the blame on sage-grouse declines away from habitat degradation…and towards predation.”

We couldn’t agree more, Clait – we are glad to have your expertise on our side! To read the rest of Clait Braun’s comments, follow the link below: