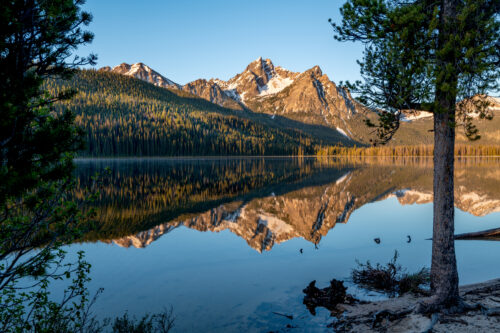 Advocates for the West and our partners will be demanding opportunity for public comment and detailed environmental review from the Federal Communications Commission (FCC) after learning that a controversial proposal to build a new 195-foot cell tower on state-owned lands on a ridge overlooking Idaho’s iconic Redfish Lake appears to be moving forward.

The cell tower was originally pitched under the guise of improving emergency communications in the area. After public opposition and indications that AT&T might abandon its proposal, the company now seeks to build a standard commercial cell tower at the same site in the Sawtooth National Recreation Area.

AT&T already signed a lease with the Idaho Department of Lands (IDL) to operate a commercial tower on state endowment land through 2040. AT&T’s annual rent to IDL under this lease is a mere $30,746.85 (increasing 3% annually). The FCC must also approve the commercial cell tower before it can be built.

“This year marks the 50th anniversary of the Sawtooth National Recreation Area,” said Bryan Hurlbutt, Staff Attorney at Advocates for the West. “Congress created this area to protect its remarkable scenery. A 195-foot tall cell tower in the heart of the Sawtooths is no way to celebrate this milestone.”

“This is a classic bait and switch by AT&T to pitch this tower for emergency communications, only to change plans and advance a commercial tower,” said Idaho Conservation League’s Senior Conservation Associate Josh Johnson. “AT&T’s decision to build a tower at this site and IDL’s willingness to facilitate this ill-advised proposal is extremely disappointing for everyone who treasures the Sawtooths.”

Advocates for the West, the Idaho Conservation League (ICL), Sawtooth Interpretive and Historical Association, and the Sawtooth Society have raised major concerns over the tower proposal since it was announced in January 2020, urging the opportunity for public comment and an environmental review.

In response to AT&T’s initial proposal, Advocates for the West, ICL, and other partners took steps to stop the construction of the cell tower, including petitioning the Idaho Land Board and federal authorities and highlighting that local search and rescue providers and communications providers agreed that there were other options to provide adequate emergency communications. Now that AT&T has pivoted to a commercial cell tower, ICL and Advocates for the West will continue to push back on this proposal and work to protect the values that make the Sawtooth National Recreation Area special.

The Sawtooth National Recreation Area, Central Idaho Dark Sky Reserve, historic sites, and scenic vistas would all be negatively impacted by the cell tower. At three times the height of surrounding trees, the proposed tower will protrude above the landscape, impacting the views of this iconic area that hundreds of thousands of people enjoy every year.