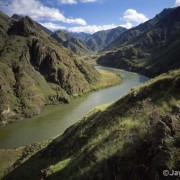 The Nez Perce Tribe recently reached a settlement agreement with the state of Oregon resolving a case that Advocates for the West filed—along with the Tribe’s Office of Legal Counsel—challenging the state of Oregon’s Clean Water Act section 401 water quality certification for the relicensing of the Hells Canyon Complex. The Hells Canyon Complex, owned and operated by Idaho Power Company, consists of three dams and reservoirs on the Snake River that straddle the Oregon/Idaho border.

The lawsuit alleged that the conditions in Oregon’s 401 certification imposed on the Hells Canyon Complex’s operations were inadequate to ensure the Complex came into compliance with the state’s water quality standards for mercury and methylmercury concentrations in fish tissue, which were set to protect human health. The Tribe also asserted that Oregon’s 401 certification should have included fish passage at the Complex and more stringent safeguards to protect migrating salmonids from lethal water temperatures that may occur below the Hells Canyon Complex during the fall spawning season. Pacific Rivers and Idaho Rivers United filed a similar lawsuit in 2019, which was subsequently consolidated with the Tribe’s case.

“The Tribe and Oregon have been close partners for years in advancing shared natural resource goals including restoring the lower Snake River and its salmon and steelhead runs by replacing the four federal dams on the lower Snake River,” said Samuel Penney, Chairman of the Nez Perce Tribe. “Despite our previous challenges in reaching an agreement on the water quality certification for the Hells Canyon Complex, I thank Governor Brown for her leadership, perseverance, and demonstrated commitment in resolving the Tribe’s concerns.”

Since time immemorial, the Tribe has relied on the Snake River and its resources for cultural, subsistence, spiritual, ceremonial, and economic purposes. To continue its way of life, the Nez Perce, or Nimiipuu, entered into a treaty with the United States in 1855 in which it reserved, and the United States secured, the right to fish, hunt, gather, pasture, and travel throughout its aboriginal territory. The Snake River is home to many of the Tribe’s treaty-reserved aquatic resources, including salmon, steelhead, Pacific lamprey, bull trout, and white sturgeon.

The Hells Canyon Complex blocks passage for many of the Tribe’s culturally-significant species and has changed the Snake River’s temperature regime and other important habitat conditions. Testing confirms that several aquatic species within and downstream of the Complex contain very high levels of methylmercury, a toxic form of mercury that can bioaccumulate in aquatic and terrestrial food chains. People who ingest fish with unsafe levels of it can experience severe health effects, and young children are especially vulnerable to methylmercury poisoning.

The extremely high levels of methylmercury found in fish within and downstream of the Hells Canyon Complex pose a serious threat to the health of Nez Perce Tribal members who exercise their treaty-reserved fishing rights in the Snake River. For this reason, the Tribe took unprecedented action in 2016 when it instituted a consumption moratorium on certain types of white sturgeon and a fish consumption advisory for bull trout and smallmouth bass in the Hells Canyon reach of the Snake River.

The settlement agreement reached with Oregon by the Tribe, Pacific Rivers, and Idaho Rivers United includes measures that Oregon will undertake to address mercury and methylmercury in the Hells Canyon reach of the Snake River. One significant measure Oregon has agreed to undertake, in collaboration with the Tribe, is the development of a pollution budget, known as Total Maximum Daily Load (TMDL), as required by the Clean Water Act. Oregon and Idaho Power Company will provide $1.5 million to fund this effort. Oregon has also agreed to take additional steps to better protect migrating Chinook salmon from extreme Snake River temperatures in the fall, to include the Tribe in the research program evaluating placement of adult spring chinook and steelhead and outmigration of their offspring from Pine Creek, an Oregon tributary located upstream of Hells Canyon Dam, and to fund a collaborative pilot research project between the Tribe and Oregon to reintroduce sockeye salmon into Wallowa Lake in eastern Oregon.

“I also appreciate Idaho Power Company’s support of Oregon’s efforts to promulgate, without further delay, the mercury and methylmercury TMDL for the Snake River and to address extreme fall temperatures in the Snake River,” Chairman Penney added. “The agreement reached between the Tribe and Oregon also honors the Tribe’s connection to sockeye salmon and to the restoration of that fishery in Wallowa Lake and our strong intergovernmental relationship. I have faith that the agreement we’ve reached will improve water quality in the Snake River, the health of Tribal members and Oregonians, and Nez Perce Tribal member access to treaty-reserved resources,” Chairman Penney concluded.