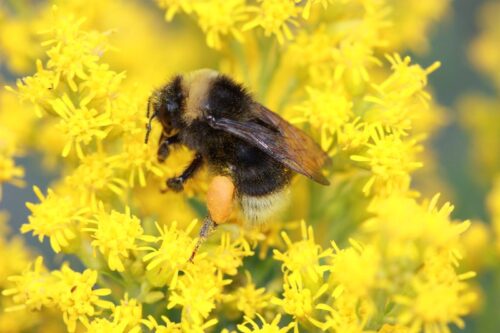 Advocates for the West filed a lawsuit challenging the federal Animal and Plant Health Inspection Service (APHIS) over its program allowing pesticide spraying on millions of acres in 17 western states.

APHIS, a highly secretive agency within the U.S. Department of Agriculture, oversees and funds the application of multiple pesticides on rangelands to prevent native grasshoppers and Mormon crickets from competing with livestock for forage.

Advocates for the West is representing Xerces Society and the Center for Biological Diversity in the lawsuit, which focuses on the harm from the pesticide spray program in Montana, Wyoming, Oregon, and Idaho — states that have experienced heavy spraying under the program.

“Too often humans use toxic chemicals as a quick fix to control natural ‘pests’ only to realize later the long-term harm of such artificial interventions,” said Hannah Clements, Staff Attorney at Advocates for the West. “APHIS’s entirely reactive approach of applying pesticides to suppress natural grasshopper population booms threatens to harm sage-grouse, native bees, and perhaps ultimately, the long-term viability of the very food systems that pesticides are supposed to benefit.”

“In APHIS‘s telling, its program magically affects only grasshoppers, and only as much as necessary,” said Andrew Missel, Staff Attorney at Advocates for the West. “But that’s not how pesticides work; blanketing hundreds of thousands or even millions of acres of rangelands with broad-scale pesticides kills bees, butterflies, moths, beetles, and other vital species, and threatens to further impair ecosystems already suffering from the effects of drought and climate change.”

“Over 80% of animals in rangelands are insects and they are the backbone of ecosystems; providing pollination, food for birds such as sage-grouse, and helping clean up waste from animals,” said Scott Black, Executive Director at the Xerces Society. “These broad-scale pesticide applications could have major negative impacts not only on the grasshoppers that are targeted but on wildlife broadly.”

“APHIS is out of control, spraying deadly poisons on biodiversity hotspots like Oregon’s Malheur National Wildlife Refuge, which is visited by tens of thousands of people each year eager to see the incredible diversity of birds and wildlife there,” said Lori Ann Burd, Environmental Health Director at the Center for Biological Diversity. “It’s time for this outlaw arm of the USDA to be held accountable for actively contributing to the escalating extinction crisis.”

Greater sage-grouse, monarch butterflies, western bumblebees, and a wide variety of other species that inhabit western grasslands are already in steep decline and are extremely vulnerable to further harm from APHIS’s pesticide-spraying program.

Insects, including grasshoppers, are a critical part of the diet of sage-grouse chicks. But APHIS’s spraying program does not take any steps to protect the imperiled birds from harm unless it is requested by landowners. Once numbering in the millions, greater sage-grouse populations have declined by more than 90%.

Federal regulators have failed to properly assess the broad environmental impacts of the spraying, as required by the National Environmental Policy Act.

APHIS claims that it enforces buffers to ensure that residential areas, organic farms, and beehives are protected. But emails to APHIS from landowners who observed impacts of the aerial pesticide spraying indicate that samples detected the pesticides on private property beyond the spray buffers.

The main insecticide sprayed is diflubenzuron, which kills a wide variety of juvenile insects. It is typically sprayed from airplanes over areas of at least 10,000 acres. The label for the product warns against exposing bees, and western rangelands are home to the estimated 600 to 1,000 species of native bees. Aquatic invertebrates that serve as important food for imperiled fish species are also vulnerable to harm from diflubenzuron.