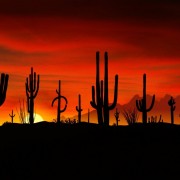 Advocates for the West filed suit against the Arizona Bureau of Land Management (Bureau) for failing to protect the native plants, wildlife, and cultural resources found within the Sonoran Desert National Monument from the devastating impacts of livestock grazing. The suit, filed on behalf of Western Watersheds Project and the Grand Canyon Chapter of the Sierra Club, challenges the Bureau’s 2020 land management decision. The decision was rushed through under the Trump Administration and opens up the entire monument north of Interstate 8 to livestock grazing, despite extensive scientific evidence that grazing damages the very resources the monument status is intended to protect.

Southern portions of the Sonoran Desert National Monument were closed to livestock by the original Monument Proclamation signed by President Clinton in 2001 and the areas north of Interstate 8 were to be grazed only if the Bureau could show livestock use was compatible with the protection of all Monument resources, including saguaros, desert tortoise, dry washes, and fragile soils. In addition to conducting an inadequate analysis of these important natural features, the Bureau also ignored threats to cultural and archeological sites caused by livestock grazing the Monument. The monument is the traditional homeland of the O’odham, Yavapai Apache, Cocopah, and Hohokam peoples.

In 2012, the Bureau released a plan to allow some livestock grazing to continue, but a court found that the agency used unsupported methods and failed to explain many of the conclusions in its analysis. The Bureau was ordered to redo its analysis, which resulted in the September 2020 decision that is the subject of today’s litigation.

“When we sued in 2014 over the last land use plan amendment for the Sonoran Desert National Monument, it was because the analysis the Bureau was relying on ignored and understated the damage being shown in their own data,” said Senior Attorney Laurie Rule. “The agency’s ‘science’ went from bad to worse under the 2020 decision, including by relying on improved conditions in areas that had not been grazed for years to justify expanding grazing use.”

“We’ve been fighting with the Bureau for years, trying to get them to address the livestock damage to the plants, wildlife habitat, and cultural resources that the Monument was designated to protect,” said Greta Anderson, Deputy Director of Western Watersheds Project. “It’s a total no-brainer to get livestock off this precious place, but the Bureau is apparently still willing to overlook its own science and plain reason in order to appease a handful of permittees out there.”

“Even non-scientists can see the impacts cattle have had on the Sonoran Desert National Monument, from dusty and deeply-eroded cow trails to huge areas devoid of any palatable vegetation, further stressing species such as the Sonoran Desert tortoise” said Sandy Bahr, Chapter Director of the Grand Canyon Chapter of the Sierra Club. “It’s outrageous that the Bureau is overlooking these impacts to these treasured public lands and insisting on using the monument for livestock feed and to the detriment of its plants and animals.”