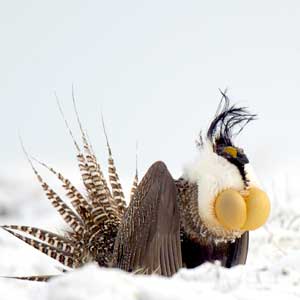 DENVER, CO: On Tuesday, January 20th, Advocates for the West filed suit against the US Fish and Wildlife Service on behalf of WildEarth Guardians and retired state biologist Dr. Clait Braun, seeking endangered species protections for the rare Gunnison sage-grouse.

Despite clear ongoing threats to the bird’s survival, in November 2014, the agency designated Gunnison sage-grouse as a ‘threatened’ species, rather than the more protective ‘endangered’ species designation the agency proposed in January 2013 and announced plans to develop a special rule that would allow the destructive activities most threatening the bird to continue.

“Over 10 years, I watched the disappearance of the Gunnison sage-grouse from Eagle, Garfield, Montezuma, and Ouray counties as the bird’s habitat became progressively more degraded and fragmented and state and local governments did nothing,” said Dr. Braun. “Today, six of the seven populations of this bird are about to disappear, and the largest remaining population, in the Gunnison Basin, is declining and still faces major threats. From a scientific perspective, we must stop dithering and impose, real, enforceable protections for the bird today.”

The case was filed in the US District Court of Colorado, where a judge will decide whether the federal agency’s decision to reduce the level of protection is supported by the best available science.

“[The Endangered Species Act prohibits reliance on voluntary and speculative conservation measures in deciding whether to protect a species,]” said Senior Attorney Todd Tucci. ”Unfortunately, the Service has undermined the protections necessary to ensure the survival and recovery of Gunnison sage-grouse by relying on voluntary and unproven measures to forestall an endangered listing.”

The threatened listing comes after years of largely ineffectual efforts by local governments to address the conservation needs of the bird. As analyzed in a recent report, the measures, nearly all of which are voluntary and unenforceable, do not meet the requirements of the ESA, and fail to adequately address the multiple threats to the species.

The Gunnison sage-grouse inhabits southwestern Colorado and southeastern Utah, and has disappeared from an estimated 93% of its original native range according to the US Fish and Wildlife Service. The bird faces continuing habitat loss, fragmentation, and degradation from rural residential sprawl, roads, power lines, livestock grazing, invasive weeds, drought, and other factors.