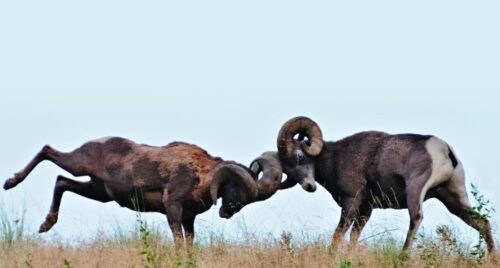 Today, Advocates for the West completed briefing for a Preliminary Injunction to halt domestic sheep grazing in the Okanogan-Wenatchee National Forest in our latest effort to protect bighorn sheep in Washington. Pending the outcome of our lawsuit filed late last year representing WildEarth Guardians and Western Watersheds Project, the injunction cites the potential catastrophic outcomes to wild bighorn in Washington if grazing continues.

Domestic sheep carry a pathogen that, when transmitted to bighorn sheep, causes deadly pneumonia in bighorns and reduces lamb survival rates for years. The pathogen—known as Mycoplasma ovipneumoniae—is especially deadly because bighorns and domestic sheep are mutually attracted to each other, making contact between the species more likely. Once disease is in a bighorn herd, it can cause large die-offs within the herd, low lamb survival for a decade, and spread of the disease to other nearby bighorn herds. There is no cure or vaccine.

“Nearly half of bighorn sheep in Washington are at significant risk due to the Forest’s actions,” said Greg Dyson of WildEarth Guardians. “It’s worth halting this ongoing risk while a court considers what steps the Forest Service must take to avoid catastrophic losses to the wild sheep that Washingtonians have worked so hard to recover.”

“The Forest Service has known for years that the risk of contact and disease transmission on these allotments was high, and yet the agency has failed to move forward with any scientifically-supported changes to prevent a dire outcome,” said Lizzy Potter, Advocates for the West staff attorney.

Our suit centers on seven domestic sheep allotments near the eastern boundary of the Okanogan-Wenatchee National Forest. The Forest Service conducted a risk analysis in 2016 determining that these allotments place four bighorn herds at high risk for disease: the Umtanum, Swakane, Cleman Mountain, and Chelan Butte herds.

The lawsuit alleges that the Okanogan-Wenatchee National Forest continued to authorize domestic sheep grazing despite knowing about the high risk to bighorns as far back as 2010. In addition, the four bighorn herds placed at high risk by the Forest Service’s actions are within 15 miles of each other and two other bighorn herds—the Quilomene and Manson herds—meaning that individual bighorns could easily foray between herds, further spreading disease picked up from the domestic sheep.

Read more about the case here.