Islands of the Sagebrush Sea 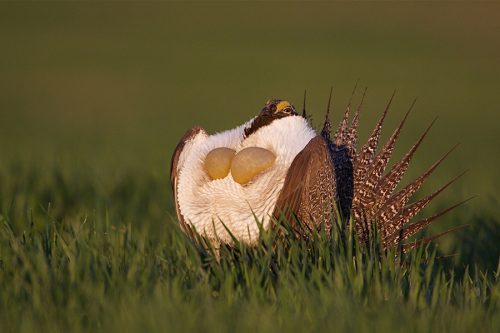 I discovered Geography my freshman year in college and have been immersed in the discipline for 40 years. As a lifelong conservationist, the sub-discipline of Island Biogeography and what it can tell us about the preservation of biodiversity is of particular interest.

The theory of Island Biogeography was developed in the 1960s by Robert H. MacArthur and Edward O. Wilson and was popularized by books such as David Quammen’s Song of the Dodo (one of my favorites on the subject). In its simplest form, Island Biogeography tells us populations found on small isolated islands are more prone to extinction than mainland populations.

Survival is dependent on the size of the island relative to the needs of the species, where a small amphibian will probably do better than a large predator, as well as opportunities for movement to and from the mainland or other islands. 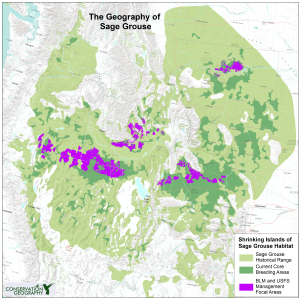 When we think of islands we typically think of places like Hawaii or the Galapagos, not the landlocked, semi-arid Great Basin. However, through alteration of natural landscapes, humans have turned vast expanses of wild lands, such as the Great Basin’s Sagebrush Sea, into scattered island habitats within an ocean of change.

Historically, the Sagebrush Sea covered nearly 520,000 square miles with a rich array of shrubs, grasses, and forbs. The diverse plant life in turn supported a variety of wildlife able to utilize different plants for food and shelter at different times of the year. Species such as the sage-grouse evolved with the Sagebrush Sea, developing a behavioral strategy for utilizing different plant communities during different life stages such as breeding and brood rearing.  As a sagebrush obligate, sage-grouse thrived – with an historical population of 16 million birds.

Unfortunately, the very strategies that allowed the sage-grouse to thrive are now contributing to its demise as populations have become increasingly isolated on shrinking islands of habitat where they are unable to access the full range of plant communities they depend upon. Sage-grouse, which once blackened the Great Basin skies, have now dwindled to a population of about 200,000. While this may still seem like a lot of birds, don’t forget the passenger pigeon’s crash and demise.

Protecting and restoring the full suite of native plant communities on remaining islands as well as increasing opportunities for sage-grouse to move between islands is critical to the long-term survival of this iconic species of the Sagebrush Sea.

Fortunately, Advocates for the West is committed to conserving sage-grouse and has led the fight for their survival for over two decades. Through aggressive and successful litigation over livestock grazing, energy development, and land management plans, Advocates for the West is working to protect and reconnect the remaining islands of the Sagebrush Sea to the benefit of all species that evolved with and depend upon this dynamic landscape.

Amy is the founder and Executive Director of Conservation Geography, a nonprofit that provides science-based analytical support to conservation organizations working in the West. She has over 30 years of experience in the application of geospatial technologies to conservation concerns such as climate change, natural resource development, and biodiversity. Amy is a member of Advocates for the West’s Board of Directors.