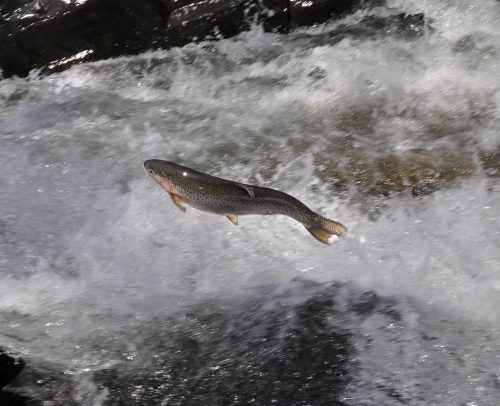 Idaho, still famous for potatoes, used to be famous for big wild steelhead. How big? The biggest in the lower 48 States.

How famous? Ted Trueblood among others became famous fishing for what are surely the most famous freshwater gamefish and perhaps the most famous of all fish not named Tarpon, Sailfish or Marlin.

Before the construction of four dams on the lower Snake River (1962 thru 1975) and Dworshak Dam (1972) on the Clearwater’s North Fork, the Idaho Department of Fish and Game (IDFG) estimates that approximately 40,000 wild B-run steelhead returned to their natal streams in the Clearwater Basin. Don’t believe it? Well in 1962, nearly 43,200 wild B-run steelhead were counted as they crossed a smaller dam (long gone) just three miles upstream from the river’s confluence with the Snake River in Lewiston.

How bad have things become?

How accurate is the count?

Furthering the gauntlet wild fish face are the sport fisheries that Washington, Oregon and Idaho permitted and then opened wide to a three-hatchery fish daily limit once it became clear that the hatchery fish would return in large enough numbers that hatchery managers would meet their egg-take goals. It just so happens that sport fishing effort results in higher encounters with wild fish even though they are outnumbered by their hatchery cousins.

What does that mean?

That means that a steelhead angler hoping to catch only hatchery keepers will typically encounter twice as many wild fish as hatchery fish, even though there are fewer wild fish in the rivers. Wild steelhead are simply more aggressive and better biters than the hatchery product.

At the same time, while some angling encounters may not be lethal, research shows that some of the wild steelhead caught in this fishery may be less successful in their efforts to spawn successfully, further reducing the overall wild fish productivity.

The bottom line: likely fewer than 400 wild B-run Clearwater steelhead will return past Lower Granite Dam for the 2017-18 run year, and anglers will likely reduce the number of wild steelhead on the spawning grounds.

Why are the three states allowing continued fishing on any steelhead at all – all the way through April 31?

Washington, Oregon and Idaho would rather sell licenses to fish for hatchery steelhead than achieve their mission to protect and maintain wild fish populations.

This story is familiar in Idaho. Why?

Snake River sockeye salmon were the first salmon listed under the Endangered Species Act (ESA) in 1990. By about 1994, the famous and singular “Lonesome Larry” returned to Redfish Lake. Despite twenty years of very intensive and expensive salmon recovery efforts (including an “emergency room-style” hatchery), Idaho’s sockeye are returning to their high mountain lake largely because of human intervention. In 2017, only 228 sockeye crossed Lower Granite Dam, a number barely eclipsed by the likely 2017-2018 wild B-run Clearwater steelhead return.

It is past time to stop fishing for steelhead late in the season and in staging and spawning areas when the runs are well below historic and even recent abundance levels – until real changes are made in our harvest, hatchery, water withdrawal and hydropower practices in the Columbia and Snake Rivers.

Hopefully the few wild steelhead returning to Idaho and Oregon rivers will be successful on the spawning beds in their natal rivers in 2018. It is too bad we barely gave them that chance.

Thanks and credit to Steve Pettit and Linwood Laughy for their advice and analysis from their home pools.