In spring of 2010, fifteen Upper Clearwater Valley friends gathered in concern for their safety, their homes and businesses, and the beautiful, wild place they love —the Lochsa-Clearwater Wild & Scenic River corridor.

With full support of Idaho’s state government, a Canadian subsidiary of ExxonMobil, Imperial Oil, intended to transform the corridor’s winding Highway 12 into a permanent heavy-haul truck route for gargantuan “mega-loads” of Asian-built equipment headed for the Alberta tar sands.

Imperial aimed to industrialize two of the nation’s original eight Wild & Scenic River corridors, a premier Scenic Byway and All-American Road; and a 174-mile segment of both the Nez Perce and Lewis & Clark National Historic Trails, and the Nez Perce Tribe’s cultural home and reservation. Alerted to Imperial’s plan, additional oil companies lined up mega-loads for the route. 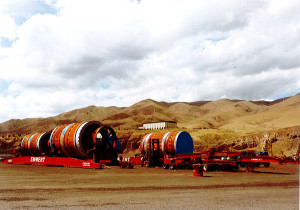 A mega-load of oil refinery equipment bound for the tarsand pits in Alberta, Canada. Photo by Roger and Janice Inghram.

Facing a hostile state government and some of the richest, most powerful corporations in the world, FG and its allies prevailed. The settlement announced this week is the powerful result of those suits.

Smart, nimble, fearless and committed—Advocates for the West is at the forefront of western environmental legal representation. Together, we took on the oil monster and won. Grassroots resistance carries, we’ve discovered, tremendous power… especially when represented by excellent lawyers.

Lin and Borg, who live beside the Wild and Scenic Middle Fork Clearwater, share an intimate knowledge of the extraordinary wildness and rich history of the Lochsa, Selway, Clearwater basin. Their sense of place has compelled them to write about, publish books about, create artworks about, and bring others to the beauty and historical significance of north central Idaho. When in 2010, they became aware of ExxonMobil/Imperial Oil’s plan for Clearwater Country, the intensity of their sense of place catalyzed action, so that, today, the most current entry into their bio is “environmental activists.”