Going from Point A to Point A in Seven Years

By Marty Trillhaase
Originally published Feb 2, 2017 in the Lewiston Tribune
(Photo of U.S. Highway 12 along the Clearwater-Lochsa Wild and Scenic corridor by Roger Inghram)

Don’t make a federal case out of everything.
Remember that sentiment?
You used to hear it a lot.

Until everything wound up in a federal courtroom.

Just like the megaload dispute along U.S. Highway 12.
Here’s where things stood about seven years ago:
You might have seen a few oversized trucks along that highway.
An extra-wide grain silo here.
An extra-long wind turbine blade there.
Even an extremely heavy piece of logging equipment somewhere else.

About 95 of these unusually large shipments – some massive enough to interrupt traffic – traveled along U.S. 12 during the first decade of the 21st century. Nobody seemed to gripe too much. After all, the route between Lolo, Mont., and Lewiston was opened to promote the region’s economy. 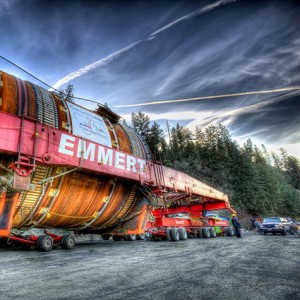 Megaloads can be larger than the Statue of Liberty. – Image by Dave King

But then came ExxonMobil and Imperial Oil with plans to run about 200 of the largest shipments anyone had ever seen – trucks as long as 210 feet, as wide as 24 feet, as tall as 30 feet and as heavy as 290 tons – on a timetable that put three of these rolling roadblocks on the two-lane highway at any one time.

At that point, you’d expect Idaho’s leadership to ask around.
The folks living along U.S. 12 would have told them about the disruptions to their immediate health and safety as well as the hit on their tourism-based economy.

The staff at the Nez Perce-Clearwater National Forest would have pointed out jurisdictional disputes. About 100 miles of U.S. 12 – from Kooskia to the Lolo Pass – run through a Wild and Scenic River corridor. A 1995 easement governing the use of the highway obligates Idaho to protect those river corridor aesthetics.

And the Nez Perce Tribe would have noted that those megaloads would run over its reservation, roughly from Lewiston to Kooskia.
When you have a politically combustible combination like that, you can engage in negotiations and compromise.

But Gov. C.L. “Butch” Otter welcomed the project. Eighteen months before anyone ever coined the phrase megaload, Otter pledged “our support and cooperation to enhance the development of this important new business opportunity.”

The state’s congressional delegation was not too far behind.
“We extend our thanks to ExxonMobil and Imperial Oil for their interest in utilizing the Port of Lewiston. Please accept this letter as the congressional delegation’s intent to work with ExxonMobil, Imperial Oil and the Port of Lewiston to develop this shipping route,” they wrote in 2009.

So where were the local residents, the tribe and the environmental community supposed to turn?

And when Winmill looked at the matter, he ordered the Forest Service to conduct a full-blown analysis into how an industrial corridor is compatible with the 1968 Wild and Scenic Rivers Act.

That was enough to block all but a few of the megaloads.

Last week, the parties in that lawsuit – the Nez Perce Tribe, the U.S. Forest Service and Idaho Rivers United – resolved their differences.
Their mediated settlement basically left the door open to a handful of large shipments – an average of two each month and then no more than an average of one per month during the busy summer season.
But the shipments are going to be unusually wide, long or heavy – not all three.

In other words, you might see an occasional extra-wide grain silo, an extra-long wind turbine blade or even an extremely heavy piece of machinery winding its way from Kooskia to Montana.

At one time, it did not require a federal judge and seven years to get from Point A to Point A. That’s because back then, the people running things in this state didn’t turn everything into a federal case.

They preferred to talk to each other. – M.T.