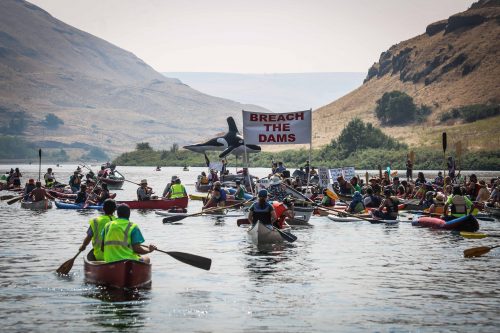 Last year more than 400 people from throughout the Pacific Northwest came together and paddled 6 miles in support of the return of a free-flowing lower Snake River. This year, in recognition of the first Nimiipuu Tribal canoe in nearly a century, the Flotilla will focus on tribal land and tradition. Canoe families from sovereign tribes across the Northwest will gather on the Clearwater River, and paddle downstream through the heart of Lewiston and Clarkston toward Chief Timothy Park on the Snake River. There, hundreds of non-tribal salmon advocates will join them on the water for a display of solidarity and a resounding call to FREE THE SNAKE!

We are excited to announce that legendary environmental activist Winona LaDuke will be joining this year’s flotilla as a guest of Nimiipuu Protecting the Environment and a keynote speaker. Winona’s efforts rebuilding indigenous communities and fighting dirty energy projects have earned her international acclaim. Partnering with Winona LaDuke and Honor the Earth will help to bring Lower Snake River Dam removal into focus as a tribal treaty rights issue of great significance to indigenous communities the world over.

Join us on Friday for outdoor activities, educational opportunities, and music from artists to be announced. Stay tuned for details on Friday activities. Stick around after the flotilla on Saturday to hear from Winona LaDuke and camp out with fellow river soldiers and salmon advocates.

The dams’ primary purpose, barge transportation, has also declined dramatically. And yet taxpayers are being forced to invest hundreds of millions of dollars to maintain and repair the dams. Removing the four lower Snake River dams would equate to the largest wild salmon recovery effort in the world, while revitalizing communities, economies and cultures throughout the Pacific Northwest and Northern Rockies.

Join us September 7 and 8, 2018 when we’ll say with one clear voice: it’s time to remove four outdated, low-value, deadbeat dams on the lower Snake River. It’s time to free the Snake!