Fighting to protect water quality and wildlife along the “High Divide” 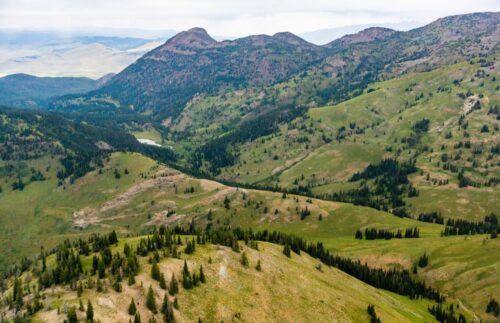 Advocates for the West recently filed a lawsuit on behalf of Idaho Conservation League (ICL) and Greater Yellowstone Coalition (GYC) challenging the U.S. Forest Service’s latest approval of a five-year gold exploration project in the Centennial Mountains near the agricultural community of Kilgore in eastern Idaho. The project, about 80 miles north of Idaho Falls on the Caribou-Targhee National Forest, was overwhelmingly opposed in thousands of comments submitted to the agency last year for its potential to threaten water quality, wildlife, and the way of life for thousands of Idahoans.

The Centennial Mountains on the Idaho-Montana border are an important migration corridor for grizzly bears, elk, and other wildlife, connecting the Greater Yellowstone ecosystem with other large wilderness and roadless areas along the “High Divide.”

Canadian mining company Excellon Resources plans to construct miles of new roads to move heavy equipment into the landscape, then drill at hundreds of sites across the project area. If Excellon determines that the deposit contains enough gold to make mining profitable in this area, the company has indicated their desire to develop an open-pit, cyanide heap-leach gold mine. This form of mining has been outlawed in neighboring Montana since 1998 for the significant threat it poses to human health and its track record of contaminating adjacent surface water and groundwater with cyanide.

The Kilgore Project is located at the headwaters of Camas Creek, within the Upper Snake River Basin. The streams in this watershed ultimately recharge the Eastern Snake Plain Aquifer, which provides drinking water to over 300,000 Idahoans. This water supply is also a key source of irrigation water that local farmers and ranchers depend upon for agricultural purposes.

“Drilling poses real risks to water quality,” said Allison Michalski, Senior Idaho Conservation Associate at GYC. “But the magnitude of these risks at Kilgore remain largely unknown, because the Forest Service never took the legally required ‘hard look’ at the threats to water quality and fish from exploration drilling.”

“The Centennial Mountains are a critical corridor linking wildlife in Yellowstone National Park and the Greater Yellowstone Ecosystem with the Northern Rockies,” said Bryan Hurlbutt, Staff Attorney at Advocates for the West. “There are proven ways to minimize the adverse impacts of mine exploration to wildlife that should have been required for the Kilgore Project.”

“The Forest Service’s ‘do-over’ attempt to permit this project does not assuage our concerns over the potential environmental impacts of this project,” says Josh Johnson, ICL Conservation Associate. “This second round of litigation is a necessary step to ensure that the Kilgore area’s water, wildlife, and rural character are protected.”

ICL and GYC are represented in the most recent lawsuit by Advocates for the West and the Western Mining Action Project. In early 2020, these groups successfully challenged a similar version of the project in federal court. At that time, the court ruled that the Forest Service failed to evaluate impacts of drilling operations to water quality and Yellowstone cutthroat trout, and that the project could not proceed until the agency adequately addressed these issues in a new Environmental Assessment.

After the court ruling, the Forest Service issued a new Environmental Assessment and again approved the Kilgore Project in November 2021. Notably absent from the new assessment were any additional safeguards against the risks to water quality and fish, and it was again met with overwhelming opposition. Based on an analysis by ICL, 99.9 percent of the 3,836 comments received by the Forest Service on their draft Environmental Assessment raised concerns about approving Excellon’s drilling proposal.

In addition to water quality impacts, the project’s intensive road construction and drilling would degrade important habitat for endangered or imperiled species – including grizzly bears, lynx, bighorn sheep, whitebark pine, and Yellowstone cutthroat trout – and fragment habitat for elk and other big game.