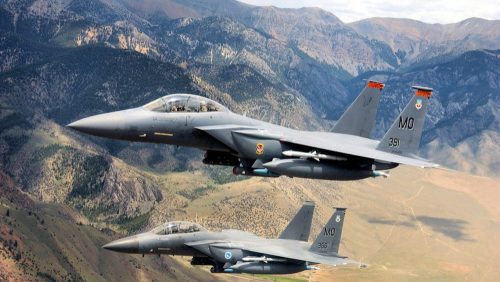 “I’m delighted with Judge Dale’s decision,” said our client and former Boise City Council member Anne Stites Hausrath, “Clearly the Air Force has not demonstrated that this program would have ‘no significant impact.’ The residents of Boise and southern Idaho deserve better! and I’m very glad that Judge Dale agrees,” she added.

Under a November 2018 decision challenged in the case, U.S. Air Force and Singaporean Air Force F-15 fighter jets located at Mountain Home Air Force Base would be authorized to conduct day-and-night urban combat training exercises up to 160 days a year. The F-15 fighters would leave Mountain Home and fly over Boise, Twin Falls, and other southern Idaho towns while “friendly” and “enemy” ground forces would position themselves in the city centers, with the “friendly” forces using the F-15s overhead to locate and eliminate the enemy forces, using lasers. But the Air Force provided very little public notice of these plans, and produced a cursory “environmental assessment” (EA) that brushed off any adverse impacts to human activities or birds and wildlife.

After hearing from many of our friends and supporters concerned about these plans, Advocates for the West represented a group of Boise residents and Great Old Broads for Wilderness in a case filed last year in Idaho federal court, arguing the Air Force violated the National Environmental Policy Act (NEPA) by wrongly downplaying noise impacts of the F-15 overflights.

In her ruling, Judge Dale agreed with us in virtually all respects. She held the Air Force violated NEPA by not assessing baseline noise conditions in areas subject to the overflights; failed to assess likely impacts on human sleep, speech, outdoor recreation, birds and wildlife, and minority or low income communities, and wrongly refused to consider any alternatives to the proposed action. In order to fully assess potential impacts, the court ordered the Air Force to prepare a full Environmental Impact Statement (EIS), as we requested.

The court prominently cited the analysis by Boise State University noise expert Dr. Jesse Barber, who has extensively studied noise impacts on quiet recreation areas and birds and wildlife, and supported our case with a declaration explaining many defects in the Air Force’s EA.

“Many thanks to Advocates for the West for this terrific victory. It is mind-boggling that the Air Force was able to continue these unlawful activities for at least five years before being challenged in federal court. Given our officials’ and government agencies’ unwillingness or inability to hold the Air Force accountable for obeying the laws of the land, it is critical to have public interest law firms like Advocates for the West that can marshal the legal talent and scientific expertise needed to safeguard the public’s interests,” said Kathy Railsback, another client in this critical case for the safety of our wildlife and human communities.

Executive Director Laird Lucas and Staff Attorney Sarah Stellberg handled the case, with help from Garrison Todd, who completed his legal fellowship with us earlier this summer.