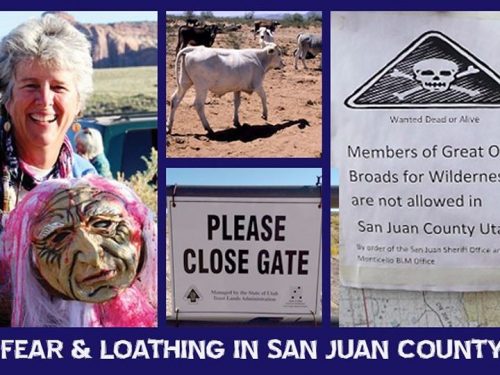 Last April, Mark Franklin closed a cattle gate on public land in a remote section of Utah desert. Now, he faces up to 16 years in prison on charges that closing the gate was an intentional attempt to harm livestock. His wife, Rose Chilcoat, a retired National Park ranger and former Associate Director of Great Old Broads for Wilderness, faces up to 21 years.

Today, May 23rd, was supposed to be the day Rose and Mark were put on trial. But in a rare bit of good news in this bizarre and unsettling case, the Utah Court of Appeals granted their motion for a stay of proceedings.

Rose and Mark now have a little much-needed breathing room while their legal team – backed by an amicus brief submitted by a broad coalition of conservation groups, including Advocates for the West – find a way to throw this case out.

Zane Odell, the rancher who is pressing charges, claims that Mark and Rose deliberately attempted to cut access to water for his cattle by closing the gate to a corral on state trust land. Odell has a wildlife camera trained on the corral, and footage of Mark closing the gate is his basis for the suit.

When Odell and some buddies spotted Mark and Rose driving by a few days later, they cut them off on the highway to confront them. Mark claims he was only trying to help by closing the gate. But Odell isn’t buying it. In a written statement to the sheriff, he said: “I believe they only came back to the [scene] of the crime to see if they could get pictures of thirsty cows or to cause more damage.”

The charges filed against Mark state that closing the gate amounted to “attempted wanton destruction of livestock” worth more than $5,000 ― a second-degree felony in Utah. The county attorney also charged him with a misdemeanor count of trespassing on state trust lands. The charges come with a combined sentence of up to 16 years.

Rose is being charged as an accomplice. In addition, she is charged with “retaliation against a witness, victim, or informant” ― an additional felony charge that would increase her possible sentence to 21 years in prison – because she wrote a letter to the BLM claiming that Odell had accosted her and Mark when he initially confronted them. She also asked that the agency look into what she thought looked like illegal bulldozing being conducted on the Odell leases from the state.

“If it wasn’t so scary, this would be a really silly case,” said Mark in a recent Huffington Post article.

Rose and Mark believe this case is retaliation for her years of conservation work and activism. In addition to working for Great Old Broads, Rose also helped found the Friends of Cedar Mesa – a group that advocated strongly for the designation of Bears Ears National Monument and is now an active voice against Trump’s reduction of the monument.

“At no time did we do anything to harass or endanger livestock. We are animal lovers who would never hurt a living creature.” Said Rose in a statement about the case. “We are innocent of these seemingly politically motivated charges that smack of retaliation for my years of successful conservation work in San Juan County.”

If allowed to move forward, this case would have a profound effect on free speech and association in San Juan County, and could set a dangerous precedent for all Americans who advocate for healthy public lands.

We are encouraged that the court granted a stay of proceedings and hope this means Rose and Mark will soon be cleared of these absurd and politically motivated charges.