Continuing to crack down on illegal suction dredge mining in Idaho  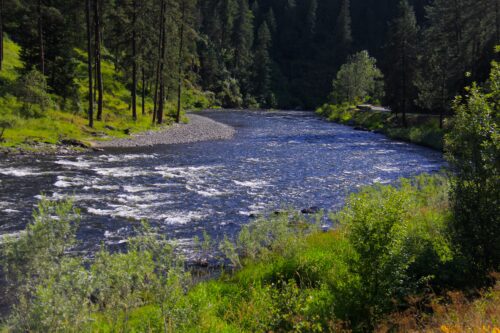 Last June, we won a resounding court victory in our case for Idaho Conservation League against high-profile California suction dredge miner Shannon Poe. There, the Court ruled that Poe violated the Clean Water Act when he polluted Idaho’s South Fork of the Clearwater River without a required permit.

Now, in the next stage of the case, we’re fighting to hold Poe accountable for his unlawful gold mining and to dissuade others from following in his footsteps.

Last week, Advocates for the West filed a brief asking the court to require Poe to pay $564,924 to the U.S. Treasury as a penalty for his unpermitted pollution discharges in 2014, 2015, and 2018. In addition, we’re seeking an injunction barring Poe from suction dredge mining in Idaho in the future, unless he obtains and complies with a Clean Water Act permit.

“Unpermitted suction dredge mining degrades water quality, damages the riverbed, and threatens fish,” said Bryan Hurlbutt, Staff Attorney at Advocates for the West. “Shannon Poe has a long history of refusing to comply with the Clean Water Act and encouraging others to join him. Not only must Mr. Poe be held accountable, but we need to send a strong message to other suction dredge miners that there are serious consequences if they refuse to follow the rules.”

Poe is the founder and President of the American Mining Rights Association (AMRA). For years, Poe and AMRA have publicized and bragged about his acts of defiance on the South Fork while soliciting AMRA membership and financial support.

We filed suit against Poe in federal court in Idaho in August 2018. In September 2019, the court denied Poe’s motion to dismiss our case. In June 2021, we won a second victory when the court ruled that Poe violated the Clean Water Act by using a suction dredge to mine for gold from the bed of the South Fork.

The June 2021 ruling held that releasing sediments and other riverbed materials from his dredge into the South Fork constitutes a “discharge of pollutants,” which the Clean Water Act prohibits, unless done in compliance with a pollution permit. Poe has refused to get such a permit.

The South Fork of the Clearwater is a State Protected River and is eligible as a federal wild and scenic river due to its outstanding natural, cultural, and recreational values. Suction dredge mining is particularly popular on the South Fork, and lawless dredging poses a serious threat to ESA-listed salmon, steelhead, and bull trout there.

But our case has ramifications far beyond the South Fork. Suction dredge mining is popular elsewhere in Idaho too, including on the Salmon and Payette rivers, where illegal dredging has been documented. Our case also sets nation-wide precedent as the first Clean Water Act citizen enforcement action establishing that suction dredge mining requires a Clean Water Act permit.