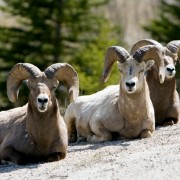 May 20, 2020 – Advocates for the West filed our opening brief in the US District Court for the District of Colorado arguing that the forest managers knew the risk that domestic sheep would pose to bighorn, yet authorized grazing anyway

January 24, 2019 – Advocates for the West filed suit to halt the Rio Grande National Forest decision to graze domestic sheep within the habitat range of bighorn herds. The suit, filed on behalf of WildEarth Guardians and Western Watersheds Project, asserts that the forest managers knew the risk that domestic sheep would pose to bighorn, yet authorized grazing anyway.

Domestic sheep carry a pathogen that, when transmitted to bighorn sheep, causes deadly pneumonia in bighorns and reduces lamb survival rates for years. The pathogen—known as Mycoplasma ovipneumoniae—is especially deadly because bighorns and domestic sheep are mutually attracted to each other. Once disease is in a bighorn herd, members of that herd can easily transmit the disease to nearby herds. There is no cure or vaccine.

Our suit centers on the Wishbone allotment near Creede, Colorado. This new domestic sheep allotment was created after the Forest Service determined domestic sheep grazing in the adjacent Snow Mesa area placed bighorns at too high of risk. The lawsuit alleges that the new Wishbone allotment does nothing to reduce the risk to bighorns, and the Forest Service’s reasons for reducing the risk rating of the allotment and allowing grazing there were arbitrary. The agency failed to analyze recent telemetry data from Colorado Parks and Wildlife that clearly shows extensive movement of bighorn sheep near the new allotment.

There are four bighorn herds near the Forest Service’s Wishbone allotment: the San Luis Peak, Bellows Creek, Bristol Head and Rock Creek herds. These four herds interact to form the larger Central San Juan bighorn meta-population. There are also three other bighorn populations within easy traveling distance for a bighorn, including the Weminuche population to the south, the Natural Arch/Carnero population to the east, and the San Juan West population to the west.

Bighorn sheep were wiped out during the era of Western settlement, as Old World pathogens carried by domestic sheep were transmitted to native bighorn sheep. By the early 1900s, bighorns had vanished from several states, with only a few thousand remaining from an estimated historic population of 1.5 to 2 million. Following more than six decades of extensive and costly restoration efforts, bighorn sheep have now been recovered to approximately 5% of their historic population levels and exist on roughly 10% of their historic range.

Senior Attorney Laurie Rule is representing our clients along with Maya Kane of Durango.