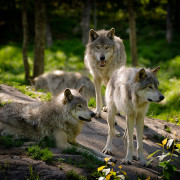 March 11, 2020 — Advocates for the West and our allies secured a strong victory in this case in an agreement that sets strict limits on how and where a federal agency can kill wolves in Idaho, bans the use of M-44 “cyanide bombs” statewide, and prohibits the use of snares to kill wolves on public lands. The new restrictions on wolf snares and the M-44 ban will remain in place until the U.S. Department of Agriculture’s Wildlife Services completes a detailed analysis on the environmental impacts of killing wolves.

April 23, 2019: Advocates for the West and Western Watersheds Project won a ruling from the Ninth Circuit Court of Appeals, which overturned the Idaho federal court’s dismissal of our lawsuit challenging Wildlife Services’ killing of wolves in Idaho.

January 4, 2018:  U.S. District Judge Lodge held that we had failed to show standing to bring our claims, denying summary judgment. His ruling states that the Idaho Department of Fish & Game (IDFG) — which has been asking for Wildlife Services’ help killing wolves since 2011 — would simply find another way to reduce the wolf population without the federal agency.

April 21, 2017:  Advocates for the West and Western Watersheds Project co-filed a reply brief in this case, demonstrating that the original claim in our opening brief is correct – Wildlife Services arbitrarily refused to prepare a full EIS, even though its wolf control actions are highly controversial and may cause significant cumulative impacts in certain areas.

June 1, 2016:  Advocates for the West filed a lawsuit in federal court challenging USDA-Wildlife Services’ killing of gray wolves in Idaho.

The agency killed at least 72 wolves in Idaho in 2015, using methods including foothold traps, neck snares and aerial gunning from helicopters. The agency has used aerial gunning in central Idaho’s “Lolo zone” for several years in a row — using planes or helicopters to run wolves to exhaustion before shooting them from the air.

The agency’s environmental analysis from 2011 is woefully outdated due to changing circumstances, including new recreational hunting and trapping that kills hundreds of wolves in Idaho each year, and significant changes in scientific understanding of wolves and ecosystem functions.

Wildlife Services does most of its wolf-killing at the behest of the livestock industry, following reports of livestock depredation. For example, five wolves were killed outside of Hailey, Idaho in July 2015 for allegedly attacking sheep. Documents indicate that Wildlife Services has even attempted to kill wolves in the newly-designated Boulder-White Clouds Wilderness. But Wildlife Services does not consider whether livestock owners took common-sense precautionary measures to avoid conflicts with wolves such as lambing indoors.

February 10, 2017:  Advocates for the West filed our opening brief requesting that the Court order Wildlife Services to halt its wolf killing activities in Idaho and re-evaluate its outdated Environmental Assessment.
In February 2016, without any public notice, Wildlife Services aerially gunned down 20 gray wolves in central Idaho’s Lolo Zone, which encompasses a portion of the Selway-Bitterroot Wilderness. The agency has also killed wolves in the Idaho Panhandle, supposedly to improve wild ungulate populations.
Wildlife Services originally issued its Idaho EA in 2011; and much has changed since then. Just weeks after the EA was issued, wolves were removed from protection under the Endangered Species Act and returned to state management. Idaho Department of Fish and Game then established a wolf hunting and trapping season and later authored several aggressive “predation management” plans.
Wildlife Services has a legal obligation to evaluate its operations in the context of the new pressures on wolves from Idaho’s activities. We are asking the Court to order Wildlife Services to produce a legally adequate Environmental Impact Statement—or at least an Environmental Assessment—and to cease all Idaho wolf-killing in the meantime.
Case Filings