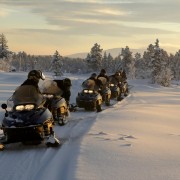 On behalf of Winter Wildlands Alliance, Advocates for the West brought a case against the U.S. Forest Service for not managing and regulating snowmobiles as it does other off-road vehicles.

In 2005, the Forest Service issued a new rule that requires every national forest to designate what trails and areas are open to off-road vehicle use and close all other areas to such use. However, this rule exempted snowmobiles from that process. Thus, the regulation of snowmobiles on each forest is completely discretionary, and numerous forests in Idaho have ignored snowmobiles when completing management plans for off-road vehicles.

Snowmobiles not only create substantial air pollution, water pollution, damage to vegetation, and disturbance to wildlife, they also create safety concerns and disrupt the peace and solitude sought by non-motorized recreationists such as cross-country and backcountry skiers and snowshoers. Due to increased use of snowmobiles as well as increased non-motorized recreation occurring on national forests, conflicts between these two user groups are on the rise. Yet the 2005 Travel Management Rule unlawfully allows the Forest Service to ignore snowmobiles and these conflicts when managing for off-road vehicle use.

On March 29, 2013, Senior Attorney Laurie Rule received word that U.S. Magistrate Judge Ronald E. Bush had ruled in our favor. In his Court Decision, Judge Bush specifically calls out Executive Order 11644,  stating that the Order – “requires an agency to promulgate regulations that provide for designation of areas of use and non-use by off-road vehicles, including over-snow vehicles, on all public lands.”