Snowmobile Use in Kapka Butte Area and Proposed Sno-Park 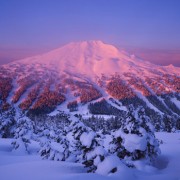 On August 19, 2015 Advocates for the West filed a reply brief. The brief states that the U.S. Forest Service (USFS) attempted to refute our client’s claims obscuring the real issues, relying on our client’s “concessions,” and offering post hoc explanations for its decision rather than even attempting to defend the actual explanations found in the USFS’s challenged decision.

The USFS tries to pretend in its brief that a lack of parking for winter recreationists is the only relevant problem at issue, and the new Kapka sno-park will solve that problem. The record shows, however, that user conflicts occurring between snowmobilers and non-motorized recreationists are the real issue here.

In addition, the USFS’s key assertions used to refute our client’s National Environmental Policy Act (NEPA) claims are inconsistent and contradictory. The record clearly shows that the USFS’s decision to switch from an environmental impact statement (“EIS”) to an environmental assessment (“EA”) was not based on a reasoned analysis but, rather, was an abrupt decision that had no rational basis and thus was arbitrary and capricious. Furthermore, the USFS’s attempts to show that its Kapka sno-park EA and Finding of No significant Impact (“FONSI”) complied with NEPA were not supported by facts in the record.

Kapka Butte is located in Oregon near Mt. Bachelor. It has long been a prime destination for backcountry skiers and snowshoers. For many years, they had exclusive use of this pristine area, but with the advancement in technology of snowmobiles, these machines can now go off-trail through deeper snow and up steeper inclines. Increased snowmobile use in remote areas such as Kapka Butte is an issue of great concern for non-motorized winter recreationists as they are becoming more and more displaced by snowmobilers. Skiers and snowshoers don’t like using the same areas as snowmobiles because they emit air pollutants, run heavy tracks through the fresh snow, disturb the pristine outdoor experience with their noisy engines, and scare off any potential wildlife sightings. The Forest Service has recognized the increasing conflicts between snowmobiles and non-motorized recreationists in this area for years. In the past, it has considered proposals to address the conflict but has only implemented a few measures that have so far been ineffective. Now, the Forest Service is proposing to build a new sno-park near Kapka Butte that would cater to snowmobiles without even addressing the concerns of non-motorized recreationists. This would allow more snowmobile use in the area, heightening conflicts and further displacing backcountry skiers and snowshoers from this prime destination. Senior Attorney Laurie Rule is working this case with assistance from Lewis & Clark Law School’s Earthrise Law Center. The clients in this case are Wild Wilderness, Winter Wildlands Alliance and Bend Backcountry Alliance.