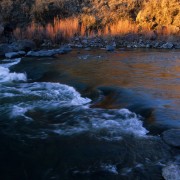 We represent a coalition of national and state groups — including Wild Earth Guardians, National Audubon Society, Sierra Club, and New Mexico Audubon — in this long-standing litigation over the impacts of the federal Middle Rio Grande water project on the endangered Rio Grande silvery minnow.

Once abundant throughout the Rio Grande, the silvery minnow is now confined to a short reach of the Middle Rio Grande in central New Mexico.  The silvery minnow is endangered by water diversions and dams that obstruct its ability to move up and down the river, and that dewater the river.  Yet until we brought this lawsuit, the federal Bureau of Reclamation asserted that it lacked any legal authority to alter river operations in order to aid the minnow.

Through a series of injunction motions and settlement talks since 1999, we have succeeded in substantially reforming how the Middle Rio Grande is managed.  The federal government now acknowledges that it owns the major dams and storage reservoirs on the river; and that it has discretionary authority to reduce irrigation diversions to aid the minnow.  Along with federal and state agencies, irrigators and cities on the river are also implementing numerous programs to conserve water, and to restore minnow habitat and populations.