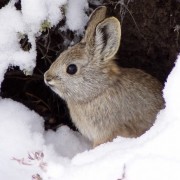 Advocates for the West sued the U.S. Fish and Wildlife Service over its refusal to protect the pygmy rabbit as an threatened or endangered species under the Endangered Species Act. The pygmy rabbit is a native rabbit once found throughout the Great Basin, in recent years rabbit populations and habitat have been eliminated or destroyed by livestock grazing, energy development, and other inappropriate uses of our public lands. Advocates for the West has a long history of pursuing the protection of pygmy rabbit populations and habitat, and we have previously won three separate rounds of litigation against the U.S. Fish and Wildlife Service, who appear incapable of protecting this imperiled species, despite the clear scientific evidence demonstrating its imminent slide toward extinction. Advocates for the West represented Western Watersheds Project on this case.