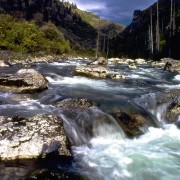 On June 24, 2015, Advocates for the West filed an opening brief seeking a temporary restraining order/preliminary injunction. IDL announced its plans to begin moving heavy equipment and perform site clearing along Forest Road 652 starting on July 6, despite our request for delay while the case is adjudicated. See the attached brief and declarations from plaintiffs in this case.

On July 10, 2015, our injunction motion was granted by the Court. The granted injunction halts U.S. Forest Service approval of road development in the corridor. In order to reach a State of Idaho timber sale, the state needs to build more than 3 miles of new roads on extremely steep, unstable slopes with seven switchbacks within a mile of the Selway River. The construction will require removal of 18,520 cubic yards of native rock and soil, essentially creating a waste area in the Wild and Scenic corridor.

In granting our injunction, the Court states: “the potential harm to the Selway River if the injunction is not granted outweighs the hardships caused by any delay to State.”

On August 3, 2015 Advocates for the West filed an opening summary judgement brief seeking the reversal and setting aside of the November 20, 2014 decision by U.S. Forest Service and District Ranger Joe Hudson, which determined that Nez Perce National Forest Road 652 is supposedly a “public road.”

On August 17, 2015 Advocates for the West filed three documents including a combined response/reply brief on cross motions for summary judgment, our opposition to IDL motion to dissolve or modify injunction, and the second Wright declaration.

On May 19, 2015, Advocates for the West filed a complaint on behalf of Idaho Rivers United against District Ranger Joe Hudson and the United States Forest Service for unlawfully designating forest road 652 on the Nez Perce National Forest as a “public road.” This designation would allow the Idaho Department of Lands to utilize the road for commercial log hauling operations without first obtaining a special use permit and without conducting any analysis of adverse impacts upon the Selway Wild and Scenic River corridor – violating NEPA, the Wild and Scenic Rivers Act, the Forest Services’ river corridor management plan, and other legal requirements.

Forest road 652 is a short, unimproved spur road that follows the Selway River within the federally designated Selway Wild and Scenic River corridor. Part of the road crosses the residential property of Morgan and Olga Wright and continues through an adjacent state land parcel where IDL proposes conducting a large timber sale. The sale would clearcut a projected 6.89 million board feet of timber to be removed over a thousand commercial logging truck trips by utilizing the road through the Wrights’ property.

The Wrights maintain the beginning of road 652 for access to their property, but beyond that it is a rough dirt track that in no way qualifies as a “public road” and has never been designated as such – until now.

The Forest Service erroneously determined the road to be a “public road” which unlawfully exempts IDL from obtaining the special use permit required before commercial log hauling on the forest road can take place. We are suing on behalf of IRU, with Deborah Ferguson providing counsel to the Wrights, because they have been deprived of their rights to participate in the decision to allow an activity that will very likely result in significant harm to the Selway Wild and Scenic River corridor and the Wrights’ property.