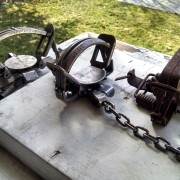 Advocates for the West is challenging BLM’s decision to allow commercial trapping in the Owyhee Canyonlands Wilderness Areas.In 2009, Congress designated six wilderness areas and sixteen wild and scenic river segments in Owyhee County in Southwest Idaho. Though close to Boise, the rugged river canyons and vast desert of the Owyhee Canyonlands offer unique opportunities for wilderness solitude and are home to abundant wildlife. But one threat to wilderness and wildlife is commercial trapping.Trapping is popular in Owyhee County. Over the last ten years, licensed trappers reported trapping 242 badgers, 559 beavers, 2,042 bobcats, 2,899 coyotes, 320 mink, 13,089 muskrats, 52 otters, 394 raccoons, 267 red foxes, 211 striped skunks, 29 spotted skunks, and 8 weasels – or a total of 20,112 fur-bearing animals in Owyhee County. Trappers reported selling the pelts of at least half of these animals.

The Wilderness Act prohibits “commercial enterprise” in designated wilderness. Accordingly, when BLM issued its draft management plan for the Owyhee Canyonlands Wilderness, it banned all commercial trapping – including trapping animals in the wilderness and then selling their pelts.

But in the final plan, BLM removed the ban on commercial trapping. According to BLM, after the agency consulted with the Idaho Department of Fish and Game (IDFG), BLM determined that the State issues “recreational,” not commercial, trapping licenses.

We represent the Idaho Conservation League in this appeal before the Interior Board of Land Appeals, seeking to protect wildlife and keep commercial trapping out of the Owyhee Canyonlands Wilderness.