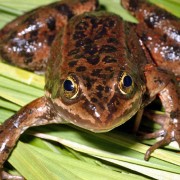 Case Title:
Concerned Friends of the Winema et al vs. US Forest Service

January 24, 2017 – In an exciting wrap-up to this important case, District Judge Aiken adopted in-full Judge Clarke’s ruling, which means that the biological opinion in question is vacated and the Forest Service must reinitiate consultation over the spotted frog. The agency will also be unable to issue new permits unless they demonstrate to the Court that the grazing will not impair the viability of the frog or the sensitive plants on the allotment.

September 12, 2016 – We received a strong decision from Oregon Federal Magistrate Clarke, who found two very serious legal violations:  the Forest Service continued to authorize grazing despite the requirement that grazing cannot threaten the viability of sensitive species, based in part because the agency failed to address the actual impacts of grazing taking into account all the illegal grazing activities that the Forest Service itself has documented.  And the federal government made arbitrary assertions that grazing would not harm the Oregon Spotted Frog without taking into account actual conditions on the ground or studying the full extent of impacts from the grazing.
The federal magistrate thus recommended that the Forest Service should not authorize further grazing here until it has fully studied the impacts and ensured that the Oregon spotted frog is not further endangered by grazing. The decision now moves to district court, where we hope the judge will approve and adopt Judge Clarke’s ruling.

October 28, 2016 – Advocates for the West filed our reply brief in this case.

March 3, 2016 – Advocates for the West filed our opening summary judgment brief that addresses our NEPA, NFMA, and ESA claims.

In May 2014, in a followup case to our 2010 victory protecting the Oregon spotted frog and unique sensitive plants, Advocates for the West filed suit against the US Forest Service.  We challenged livestock grazing activities on the Antelope Allotment of the Fremont-Winema National Forest that directly trample and degrade frog habitat and sensitive plants.  This allotment contains over 400 acres of important wetland habitat, and is home to sensitive species such as the Oregon spotted frog, rare mosses, sedges and mollusks.

In particular, Jack Creek runs through the Antelope Allotment, which is habitat for a population of Oregon spotted frog that was first discovered in 1996. Since this population was discovered, its numbers have plummeted from at least 335 down to fewer than 20 known breeding females. In 2013, cattle were documented trampling streambanks and wetland and riparian vegetation, dewatering pools, and lowering water quality with their waste – severely damaging much of the spotted frog’s habitat.

Since our 2010 victory, the Forest Service has continued to authorize grazing that damages the unique wetlands and sensitive plant species on the Antelope Allotment, and allows cattle to access spotted frog habitat in Jack Creek. Much of the access to Jack Creek occurs due to cattle breaking through fences on the allotment, but such trespass continues to occur year after year despite repeated warning letters to the permittee.  In August 2014, the Oregon spotted frog was listed as a threatened species under the Endangered Species Act (ESA), and we filed a supplemental complaint to address new ESA issues.

In this followup case, Advocates for the West and our clients are challenging the Forest Service’s violation of the National Environmental Policy Act (NEPA) by continuing to allow grazing on the allotment without completing a supplemental NEPA analysis. Furthermore, we are challenging the agency’s violations of the National Forest Management Act by approving grazing over multiple years despite the clear evidence that such actions pose a serious threat to numerous sensitive species and their habitat.  We are also challenging the new biological opinion by U.S. Fish and Wildlife Service that authorizes continued grazing of frog habitat on this allotment.