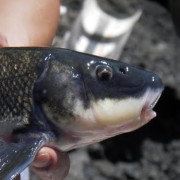 The challenged grazing occurs in the Lost River watershed in the Klamath Basin, which has been facing years of a severe drought and includes some of the few remaining populations of endangered Lost River and shortnose suckers. The federally authorized grazing has caused long-term and continuing damage to important habitat for suckers in this watershed. Indeed, the Forest Service’s own monitoring indicates that grazing has not complied with authorizations, contributed to poor riparian conditions, and increased water temperatures.  Water diversions, climate change, and the severe drought in the Klamath Basin compound the harm caused by grazing to suckers and their habitat.

The lawsuit alleges that the U.S. Forest Service violated the Endangered Species Act, the National Forest Management Act, and the National Environmental Policy Act by approving livestock grazing that harms Lost River and shortnose suckers, listed as endangered under the ESA, and their critical habitat on the National Forest.  The lawsuit also alleges that the U.S. Fish and Wildlife Service violated the ESA through its initial consultation over grazing’s impacts to endangered suckers and its failure to re-initiate consultation due to new information and circumstances related to the effects of grazing.