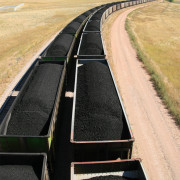 In August 2014, BNSF Railway announced its intention to build a second rail bridge across Lake Pend Oreille. The bridge would accommodate additional rail traffic carrying crude oil from the Bakken and coal from the Powder River Basin to refineries and ports in the Pacific Northwest.

The nearly mile-long new bridge would be located east of US 95’s Long Bridge and next to BNSF’s existing rail bridge. It would rest on more than 100 piles driven 150 feet into the lakebed. BNSF has stated that it hopes to construct the bridge by 2018.

There has been no shortage of alarming headlines in recent years as record levels of oil have spilled from trains in major railroad accidents across North America – contaminating groundwater, destroying buildings, sparking fireballs and explosions, causing evacuations, and even killing people.

Coal trains present their own problems. Passing coal trains have been documented to emit coal dust – which contains arsenic, mercury, and other contaminants – and little is known about the impacts of coal dust pollution on our communities. Uncovered coal trains spill coal as they cross or pass next to waterways, and it is not known how much coal is already spilling into Lake Pend Oreille.

Regardless of what’s being transported, increased rail traffic itself would be a major burden to Sandpoint and nearby communities. On average, more than 60 trains cross the existing bridge and pass through Sandpoint daily, causing congestion that slows down commutes and regularly delays emergency response times around the city by 5 to 10 minutes. With the new bridge, train traffic could double, adding to congestion and delays. The City of Sandpoint analyzed the impacts of increased rail traffic and, using conservative forecasts of increased rail traffic, found that residents can expect six hours of traffic delays every day and annual economic losses of $575,000 by 2020.

These risks and burdens come with no benefit to communities in North Idaho, which is why Advocates for the West is teaming up with Idaho Conservation League to oppose BNSF’s proposal.