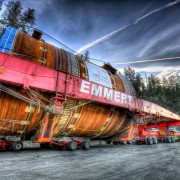 Regarding the 200+ mega-loads that Exxon-Mobil pushed to ship up Idaho’s rural Highway 12, along the Wild and Scenic Middle Fork Clearwater and Lochsa rivers corridor….

“For the first time yesterday the size of our collective accomplishment settled on me. The two giant Keiwit cranes are no longer at the Port of Lewiston. Two half-high Exxon modules are hooked to trucks, a third sits ready loaded on a hydraulic trailer. Two of their half-blue buildings are parked nearby in the nearly empty space that was once filled with giant loads. The upstream 8 acre storage lot is vacant.

Three loads are scheduled to leave Port of Lewiston tonight.

And monument to Exxon’s gutted plans, Babe the Blue Box still sits whole in the snow near Lolo Pass.

This from Linwood Laughy, Highway 12 intervenor and champion, who along with his wife Borg Hendrickson created a massive citizen movement against Big Oil’s plans to transform their beloved community into a ‘high and wide’ industrial transportation corridor.

As Margaret Mead said, “A small group of thoughtful people could change the world…”

All of us at Advocates for the West are so pleased to have given legal might to this most amazing citizen effort!

Of course, we are still fighting for permanent legal protections for the Wild and Scenic river corridor. Stay tuned for more….

Today Advocates for the West filed a petition for reconsideration asking Hearing Officer Duff McKee to reconsider a portion of his June 27th Recommended Decision on Exxon/Imperial mega-loads up Highway 12.

We have 14 days after the ruling to file a motion for reconsideration.

Megaloads decision now in the hands of the Hearing Officer

Advocates for the West filed their post hearing brief in the case to prevent Idaho’s Highway 12 along the Lochsa and Clearwater Rivers into becoming Big Oil’s high-and-wide corridor to the Alberta Tar Sands.  The decision to change “wild and scenic” to “high-and-wide” industrial corridor is now in the hands of the Hearing Officer.

Representing locals and concerned groups, Advocates for the West presented evidence for two weeks that converting Highway 12 into an industrial high-and-wide corridor is bad for Idaho and for our way of life.

We are expecting a decision from Hearing Officer Duff McKee in early June.

Thank you to Fighting Goliath, Friends of the Clearwater, our expert witnesses, the Nez Perce Tribe, and so many more for taking time to speak out for the Idaho we all love and enjoy.

Advocates for the West has today filed a Petition To Reconsider with the Director of the Idaho Transportation Dept., asking him to withdraw the February 14, 2011 decision approving over-legal permits for 207 mega-loads that ExxonMobil and its Canadian affliate, Imperial Oil, seek to haul up Highway 12 along the Clearwater and Lochsa rivers. The Petition cites news reports that Exxon/Imperial are already cutting up the loads at Lewiston to send them a different route, and shipping more loads from Vancouver via interstate highways.  “These facts completely undercut Exxon’s assertions over the last year that they have to use Highway 12 for these mega-loads,” said Laird Lucas, Executive Director.

We also filed a Petition to Intervene on behalf of the Friends of the Clearwater to participate in the “contested case hearing” that ITD will be conducting over the Exxon/Imperial mega-loads.

Although required to keep delays under 15 minutes, Idaho Transportation Department’s spokesman Adam Rush reported today that there were 10 delays that violated the rule, one delay as long as 59 minutes.  A sharp curve between Greer and Kamiah is to blame for the delay.

Heart of the Monster is now in print

The book we have been waiting for is here! Heart of the Monster by Rick Bass and David James Duncan is now available in bookstores. The authors did an incredible job illustrating what was thought of as a local issue having global impacts. This book will engage and enrage you and is a must read for anyone worried about the future of our planet.

Advocates for the West just completed the “contested case” hearing over Conoco mega-shipments up Highway 12 in central Idaho. The hearing was packed with media and interested persons — and demonstrated numerous problems with the ITD permit process. Spokane reporter Betsy Russell was there and blogged about the events throughout the hearing — her reports give a great sense of the testimony and the hearing.

The hearing has generated substantial media elsewhere — including an editorial from the Lewiston paper that ran this weekend.

Hearing Officer Merlyn Clark issued a recommended order today, finding that our clients — residents, property owners, and small business people on Highway 12 – have a “direct and substantial interest” in the proposed ConocoPhillips mega-shipments up the scenic Clearwater and Lochsa river corridor, and thus must be allowed to intervene to oppose the Idaho Transportation Dept. permits for these massive shipments.

The hearing officer also ruled that the Conoco mega-loads cannot roll until a formal “contested case” hearing is completed, following the recent Idaho Supreme Court ruling on this matter.  This means that the Conoco shpments will remain in storage at the Port of Lewiston pending further proceedings.

“This is a great victory for the residents and business people along Highway 12,” said Executive Director Laird Lucas, who appeared before the hearing officer last Friday.  “We look forward to a full airing of all the facts and impacts of these mega-shipments.”

The Idaho Supreme Court just released a decision in our case challenging ConocoPhillips’ proposed mega-shipments of oil refining equipment up Highway 12.  Although the court’s 3-2 decision technically reversed our district court victory, the ruling was procedural — and helps us by clarifying that Idaho Transportation Dept. must follow “contested case” procedures before issuing the Conoco permits.  “This decision is important in  directing that ITD should allow the public full participation in determining whether to allow these massive shipments up Highway 12,” said Executive Director Laird Lucas, who argued the case in the Idaho Supreme Court on October 1st.  “We will be filing a new motion with ITD this week to follow up on this ruling,” he added.

In our latest challenge to Big Oil’s plans to ship massive equipment up Idaho’s scenic Highway 12, Advocates for the West this week filed a Petition for Contested Case Hearing with the Idaho Dept. of Transportation. “This petition seeks a full and public hearing on the proposed Exxon shipments, instead of the secret, behind-closed-doors deals that ITD has evidently been making with Big Oil,” said Executive Director Laird Lucas.

Judge Bradbury this afternoon issued a 16 page decision in our favor, holding that Idaho Transportation Dept violated its own rules in approving four mega-shipments by ConocoPhillips up Highway 12 along the Clearwater and Lochsa Rivers.  This is a sweeping ruling for our clients and confirms that ITD failed to consider public convenience and safety in bowing to Big Oil’s desires to turn Highway 12 into a “high and wide” corridor.

Great News!  District Judge John Bradbury issued a temporary restraining order today blocking Idaho Transportation Dept. from allowing ConocoPhillips to ship massive oil refining equipment up the Clearwater-Lochsa corridor.  The court cited the “great damage” the shipments might cause and that ITD “may be violating its own regulations” in approving them.  The TRO lasts until Friday this week, when a preliminary injunction hearing is scheduled in Grangeville.

Representing three local residents and business owners, Advocates for the West today filed suit in Idaho County court asking for an injunction to stop the Idaho Transportation Dept. from allowing ConocoPhillips to haul massive oil equipment up Highway 12 along the Clearwater and Lochsa Rivers.  A ruling on the injunction is expected before Weds.  READ the petition, injuction motion, and affidavits here.

Keep Big Oil out of the Lochsa wild and scenic river

Advocates for the West is challenging Big Oil’s plans to turn the Lochsa wild and scenic river into a “high and wide” corridor for hauling massive oil field equipment to the tar sands of Alberta.  We have recently submitted comments to both Idaho Transportation Dept. and US Forest Service outlining their legal violations in allowing Big Oil’s plans.

Advocates for the West is working with concerned individuals and conservation groups to oppose plans by Exxon Mobil, ConocoPhillips, and other Big Oil companies to convert the Wild and Scenic Lochsa and Middle Fork Clearwater rivers corridor along U.S. Highway 12 into a high-and-wide industrial corridor devoted to the transport of massive oil extraction equipment manufactured overseas.

With the aid of the Idaho Transportation Department, Exxon spent millions of dollars moving powerlines and altering trees along Highway 12 in 2009 to prepare the way for 207 shipments of equipment bound for Canada’s Alberta Tar Sands. Under Exxon’s original plan, each of these heavy haul loads would have been nearly a football field in length, 3 stories high, and weigh up to 330,000 pounds.

Following Exxon’s lead, ConocoPhillips got permission from ITD to ship 4 massive coke drums to its oil refinery in Billings. Then other companies began to consider Highway 12 as a route for mega-loads.

The Lochsa River and the Middle Fork Clearwater River, were designated as one national Wild and Scenic River in 1968, and Highway 12 is a small winding road that serves local businesses and towns along its route.  Under Big Oil’s plan, however, Highway 12 will become the nation’s first “high and wide” corridor for oversized equipment — threatening businesses, recreation, and tourism, as well as the sanctity of the rivers.

That’s why Advocates for the West stepped in to provide legal support for the group of devoted North Central Idaho citizens fighting to preserve their way of life. In August 2010, we won a temporary restraining order prohibiting ITD from allowing the Conoco shipments. Later that year, we won a ruling from the Idaho Supreme Court that ITD must treat applications for over-legal loads as “contested cases” that affected citizens are entitled to challenge at an evidentiary hearing.  We went on to challenge both the Exxon and Conoco projects at such evidentiary hearings before hearing officers appointed by ITD.

As a result of our work, the Conoco transport was delayed for five months and only 1 of the 207 loads envisioned by Exxon traveled on Highway 12. Exxon was forced to cut the remaining loads in half and transport them along other routes.

Other companies have asked to use Highway 12 to transport massive industrial shipments.  Advocates for the West remains committed to protecting Highway 12, the Wild and Scenic river corridor, and the many individuals and businesses depending on these public resources.