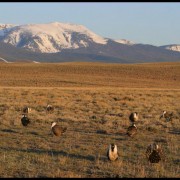 BLM previously approved oil and gas drilling on the Moxa Arch project here, which has already harmed the sage-grouse population.  And BLM is planning to expand the Moxa Arch field, which will further fragment the sagebrush habitat and displace sensitive species, including pygmy rabbit and sage-grouse.

Yet BLM recently approved new ten-year grazing permits for JR Broadbent — one of the largest and richest corporate sheep ranchers in the West — on these same lands, without ever acknowledging that domestic sheep harm sage-grouse habitat.  Neither did BLM examine how the adverse effects of the grazing and the Moxa Arch project will cumulatively degrade the native habitat and harm sage-grouse, pygmy rabbits, or other imperiled species (including prairie dogs).

On August 15, 2008, an Administrative Law Judge with the Dept. of Interior’s Office of Hearings and Appeals agreed with us that BLM thus violated NEPA in approving the grazing permits; and ordered them reversed and remanded with instructions for BLM to prepare a full environmental analysis.