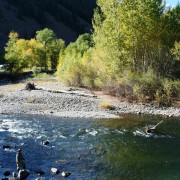 On January 3, 2012, Advocates for the West filed a complaint on behalf of Idaho Conservation League against EPA for failing to comply with its duty under the Clean Water Act to either approve or disapprove Idaho water quality standards which aim to protect people who consume fish caught in Idaho’s lakes and rivers from toxins.  The State of Idaho adopted the water quality standards in 2006, and the standards reflect an increase in the estimated fish consumption rate in Idaho.  Until EPA takes action, people who consume large amounts of fish caught in Idaho risk excessive exposure to toxins.

Advocates for the West represented Idaho Conservation League (ICL) in this successful action against EPA for failing to timely approve or disapprove important water quality standards in Idaho.

In 2006, Idaho adopted a new fish consumption rate, which estimates the amount of fish people catch and eat from Idaho’s lakes and rivers. Idaho used the fish consumption rate to develop water quality standards and set limits on toxic pollution that may be discharged to Idaho’s waterbodies. These limits aim to protect people from exposure to toxins from eating fish.

Unfortunately, studies show that fish consumption rates in Idaho are much higher than the rates Idaho used, meaning people who consume high levels of fish in Idaho may not be adequately protected from toxins.

In respone to our lawsuit, EPA finally reviewed Idaho’s toxics standards and issued a letter of disapproval on May 10, 2012, finding Idaho’s standards failed to protect human health and directing Idaho to develop new standards. Accordingly, Advocates for the West dismissed the lawsuit.