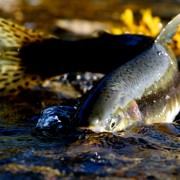 In April 2013 we sent EPA a Notice of Intent to Sue for failing to promptly revise these important water quality standards. We were able to craft a settlement agreement which gives IDEQ and other stakeholders time to complete fish consumption studies, but which sets a deadline to revise the standards by late 2016.