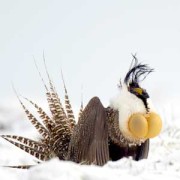 September 27, 2018 – A federal court decision preserves the listing status for Gunnison sage-grouse as a threatened species, with the critical habitat the U.S. Fish & Wildlife Service designated for it intact. Fewer than 3,000 of this unique sage-grouse species remain, clustered around Colorado’s Gunnison Basin. Advocates for the West represented WildEarth Guardians and Dr. Clait Braun in defending the decision from attack by Colorado, Utah, and others, after putting on hold their own litigation alleging the gravely imperiled bird should have been listed as endangered while the Service completes a recovery plan. This decision is a win for the Endangered Species Act and a win for the Gunnison sage-grouse.
July 21, 2017 – Advocates for the West filed our opening brief in this case.
Case Filings

In 2014, Advocates for the West filed a 60-day notice of intent to sue the U.S. Fish and Wildlife Service for backtracking on the agency’s previous proposal to list Gunnison sage-grouse as “endangered.” The Gunnison sage-grouse is found in seven populations scattered across SW Colorado and SE Utah. The bird is a separate species related to the larger and more widely distributed greater sage-grouse but known for its distinctive topknot of display feathers. Similar factors impact their survival including oil and gas development, grazing, residential development and habitat fragmentation.

There are now fewer than 3,000 of these “sage-grouse with a mohawk” birds, now living on just 7% of their former range. Many isolated populations have declined to less than 200 birds apiece, and may soon disappear altogether. The U.S. Fish and Wildlife Service ignored evidence that the bird’s population is known to be crashing and that the species is in immediate threat of extinction. The agency changed its own 2013 recommendations and listed them as “threatened” in response to political pressure.

In the Gunnison sage-grouse case, attorneys for Advocates for the West will represent Dr. Clait Braun of Tucson, Arizona (a leading biologist studying the bird) and conservation groups WildEarth Guardians, Wild Utah Project, and Great Old Broads for Wilderness. A similar notice of intent was filed by our allies the Center for Biological Diversity and Western Watersheds Project.