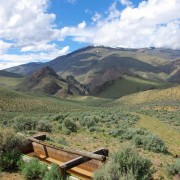 Great news!  We’ve received a preliminary win on one of our most bizarre cases – our challenge to the Bureau of Land Management’s (BLM’s) cancellation of a grazing permit for reasons related to failing to graze enough.

The grazing permit is associated with the Greenfire Preserve on the East Fork of the Salmon River, home to salmon and steelhead protected under the Endangered Species Act and spectacular wildlife and scenery.  The permit is held by Valley Sun, LLC and managed by Western Watersheds Project (WWP), both represented byAdvocates attorney Kristin F. Ruether.

BLM’s attempt to cancel the permit came despite the fact that BLM admits that the rest from grazing has allowed significant habitat recovery.

An Administrative Law Judge agreed with Advocates that the permit must not be cancelled during the pendency of the case.  The judge relied upon a report prepared by pro bono geologist Don Clarke demonstrating the possibility of harm from grazing on the allotments’ steep terrain.  In contrast, any “harm” to BLM from resting the allotments was speculative and insubstantial.

Many thanks to geologist Don Clarke for preparation of his critical report, and to Brian Ertz, Debra Ellers and Dale Grooms of WWP for additional extensive monitoring.  Thank you!

Advocates for the West represents Valley Sun, LLC and Western Watersheds Project on their challenge to a decision by BLM to cancel the Greenfire Preserve’s grazing permit due to reasons related to lack of grazing.  On June 11, 2010, an ALJ granted Valley Sun a stay of BLM’s cancellation decision, citing potential harm identified by expert geologist Don Clarke, in contrast to only speculative harm raised by BLM. This results in the permit not being cancelled during the pendency of the appeal.