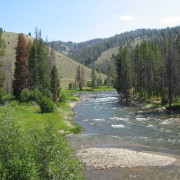 On October 28, we favorably dismissed our lawsuit against the Forest Service for approving gold mining for a second year in a row in wetlands and meadows along East Boulder Creek, a tributary to the Salmon River in central Idaho.

We are pleased that East Boulder Creek will be better put back together for fish and wildlife that depend on it and hope that this case was a wake up call to the Forest Service that similar mining projects cannot simply be exempted from environmental review.

Advocates for the West is challenging the Forest Service’s decision to approve gold mining in the Napoleon Ridge Roadless Area on East Boulder Creek without studying the environmental impacts.

East Boulder Creek is a tributary to the main Salmon River and is located approximately 11 miles west of North Fork, Idaho. On July 10, the Forest Service approved a miner’s plan to reopen a road, drill 60 holes, and excavate a trench within protected wetlands and riparian areas along East Boulder Creek and its tributaries in the Salmon-Challis National Forest.

This is the second year in a row that the Forest Service has allowed the miner to search for gold on East Boulder Creek. Last year, the Forest Service documented numerous violations of the miner’s operating plan, including driving excessively through the Creek, cutting more trees than was authorized, and failing to remove log bridges and revegetate disturbed areas at the end of the season.

The Forest Service improperly relied on a NEPA “categorical exclusion” to avoid studying the environmental impacts of the gold mining project. The categorical exclusion for mineral explorations is available only for short-term projects lasting up to one year. But this is the second year of gold mining on East Boulder Creek, making the project ineligible for exclusion from NEPA.

Furthermore, the Forest Service failed to consider the impacts of the miner’s operations from last year and ignored documented harm that livestock grazing is causing to the project site when the agency concluded that it was certain there would be no significant impacts.

This is just one example of the Forest Service’s widespread misuse of this categorical exclusion to approve numerous mining projects throughout our national forests.

Advocates for the West represents the Idaho Conservation League and is working with Roger Flynn from the Western Mining Action Project.