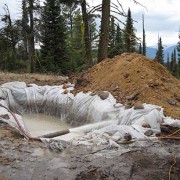 On July 11th, 2016, Advocates for the West secured a federal court victory for the second time in our ongoing battle to keep Canadian mining company “American CuMo” from developing in the Boise River watershed what it claims could be the largest open pit molybdenum mine in the world.

This time it was a rare flower, Sacajawea’s bitterroot, that placed the mine exploration on hold; the CuMo site is home to the largest known concentration of the plant. The Court stated in its decision: “What is known and recognized… is that [Sacajawea’s bitterroot] is very rare, a large portion of its population is located within the Project Area, it is protected, and its future is at risk.”

On January 15, 2016 Advocates for the West filed a lawsuit challenging the Forest Service’s decision to allow CuMo to drill underground in the headwaters of the Boise River. We filed suit in federal court, faulting the Forest Service for approving the CuMo Exploration Project without taking sufficient steps to protect water quality and rare flower habitat.

As approved by the Forest Service, CuMoCo would drill 259 exploratory holes from 1,500 to 3,000 feet underground throughout the 2,885-acre project site. To access the drill areas, CuMoCo would clear forest and build over 10 miles of roads. CuMoCo would also construct 137 drill pads and simultaneously operate up to four drill rigs day and night.

Our lawsuit challenges the Forest Service’s Sept. 30, 2015 decision to approve the project again, still without adequately protecting against water contamination. In the lawsuit, we ask the court to order the Forest Service to protect against water contamination and the destruction of Sacajawea’s bitterroot habitat before allowing any exploration to proceed.

Advocates for the West is continuing to fight the CuMo Mining Exploration Project in the Boise River watershed. In 2011, we successfully challenged the Forest Service’s approval of CuMo’s intensive plan to build roads, drill pads, and waste pits and to conduct 24/7 drilling in the headwaters of Grimes Creek, a tributary to Mores Creek and the Boise River.

In that case, a U.S. District Judge found that the Forest Service had failed to consider that drilling around 250 holes up to 3,000 feet deep could alter groundwater flows and cause water contamination. Now, the Forest Service has released a Supplemental Environmental Assessment as well as its draft approval of the the Project, which would allow the same plan to move forward.

According to CuMo, this site has the potential to become the largest open-pit molybdenum mine in the world. In the meantime, the company seeks to proceed with this 5-year exploration project. On July 10, 2015, Advocates for the West filed Objections with Forest Service on behalf of our client partners Idaho Conservation League, Idaho Rivers United, Golden Eagle Audubon Society, and the Sierra Club.

Our Objections warn the Forest Service that the large-scale exploration project cannot be approved without a better understanding, and avoidance of, harmful impacts to water quality, wildlife, and the rare plant Sacajawea’s bitterroot. Sacajawea’s bitterroot is an extremely rare plant. It is known to exist in only Idaho, in just a handful of counties. The largest populations of this plant in the world are found at the CuMo site. Unfortunately, this species is at risk due to climate change and other factors.

On top of that, the 2014 Whiskey Complex fire burned a portion of the CuMo site. Both the fire and a dozer line plowed through these important populations of Sacajawea’s bitterroot. It is currently unknown what impact the fire and dozer line had. Nevertheless, the Forest Service plans to allow CuMo to build an undisclosed number of new roads and drill pads within Sacajawea’s bitterroot habitat.