Canyon of the Ancients Grazing 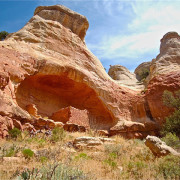 On September 15th, the BLM published a letter announcing that after “considering the protests received on this grazing decision the BLM has determined that further analysis is warranted” before issuing 10-year term grazing permits for the Flodine Park and Yellow Jacket Allotments in Canyon of the Ancients National Monument.

Instead, an Environmental Assessment regarding the grazing permits will be developed in “consultation with all interested parties.”

Canyon of the Ancients includes 170,965 acres in the Four Corners region of southwest Colorado and contains “the highest known density of archaeological sites in the Nation”, according to the 2000 Proclamation establishing the national monument.

The Clinton Administration set aside this special land because it holds well-preserved evidence of the cultures and traditions that spanned thousands of years in the American Southwest. The cultural and historic objects present in the monument include cliff dwellings, villages, sacred springs, agricultural fields, rock art sites, and sweat lodges. The monument also includes important natural resources, unique geology and land forms, and is home to a variety of wildlife species, including unique herpetological species.

Despite the strong protection afforded to this land and these special resources by its National Monument status, BLM authorizes grazing throughout the majority of the monument and is currently proposing to expand grazing by re-opening two allotments — Flodine Park and Yellow Jacket — which have not been grazed for ten years. Prior to the cessation of grazing in 2005, these allotments had a history of livestock-induced violations of key standards that protect soil, water, plant, wildlife, and other resources.

BLM’s decision to re-open these allotments conflicts with requirements in the Presidential Proclamation establishing the monument, the National Landscape Conservation System, the National Historic Preservation Act, and the Monument Management Plan, which collectively require BLM to protect cultural and natural resources and wildlife.

Rather than conducting a comprehensive environmental analysis to determine the impacts of the grazing permits and their compliance with these laws, BLM avoided its obligations under the National Environmental Policy Act by relying on a ten-year old environmental assessment for a different grazing decision. As a result, BLM failed to consider numerous impacts and new factors that have arisen in the past decade, including climate change.

Our protest requests that BLM reverse its proposed decision and determine that the Monument Management Plan and other laws require BLM to permanently retire the grazing allotments at issue, or at a minimum conduct a complete environmental analysis under all the applicable statutes before issuing final grazing permits.