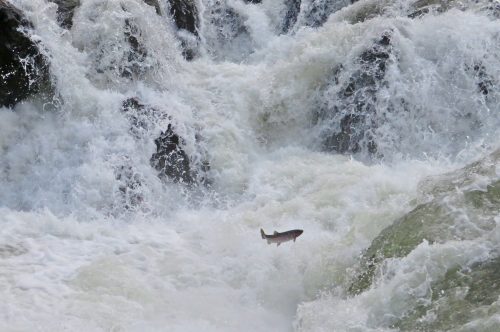 Advocates for the West secured a victory this week in the Ninth Circuit Court of Appeals to protect threatened Idaho salmon, steelhead, and bull trout from irrigation water diversions in Idaho’s Sawtooth Valley. The Ninth Circuit decision, issued on August 25, upholds our lower court win that requires the U.S. Forest Service to consult with experts and protect fish.

We sued the Forest Service in 2018 on behalf of Idaho Conservation League (ICL) over the agency’s failure to protect Idaho’s threatened fish from 20 irrigation diversions located on public lands in the Sawtooth National Recreation Area (SNRA). Salmon, steelhead, and bull trout are federally protected under the Endangered Species Act. Federal Judge B. Lynn Winmill ruled in our favor in June 2019 and ordered the Forest Service to take action, but a group of water users appealed. The Ninth Circuit ruling rejects their appeal in its entirety.

Salmon and steelhead that spawn in the Sawtooth Valley swim farther and climb higher than any populations that remain on the planet. The SNRA was created with the express goal of protecting these fish, but unregulated irrigation diversions are undermining this goal.
The irrigation diversions remove water from the upper Salmon River and its tributaries, including Fisher, Fourth of July, and Champion Creeks. Many of the ditches that deliver the water to private ranches and homes are a century old and unlined, resulting in unnecessary loss of water for both fish and water users. Some diversions create barriers to fish, blocking them from swimming up or down stream.

“With one of the worst steelhead runs on record, we all need to do our part to prevent iconic salmon and steelhead from going extinct,” said Marie Callaway Kellner, ICL’s Conservation Program Director. “ICL looks forward to working with the Forest Service and water users to find a solution so Idaho’s endangered fish can stay in the river where they belong while water users get the water they need.”

Staff Attorney Bryan Hurlbutt, who represents ICL in this matter, said, “This is an important victory for Idaho salmon and steelhead, fish that make one of Earth’s great migrations swimming over 800 miles upriver to spawn in the Sawtooth Valley. Salmon and steelhead face many obstacles on this journey. The least we can do here in Idaho is ensure that those few fish who complete the trip are welcomed by safe waters.”